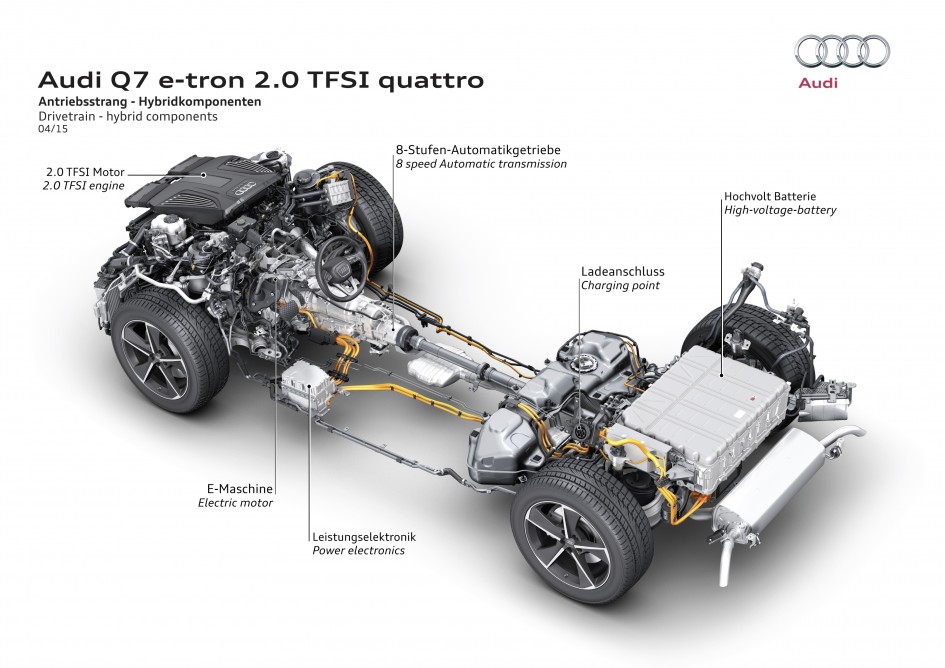 The speaking group comes back on the stage for a group photo. #CESAsia pic.twitter.com/Ceixyb5p4K

The original Audi Duo was created in 1989 and was first shown at the Frankfurt Motor Show, and was based on the Audi C3 100 Avant. It was a petrol engine/electric hybrid concept vehicle. It was powered 100-kilowatt (136 PS; 134 bhp) five-cylinder petrol engine that drove the front wheels, and a part-time electric motor that could be activated when the vehicle was stationary, developing 9-kilowatt (12 PS; 12 bhp) and drove the rear wheels. It used nickel-cadmium batteries. 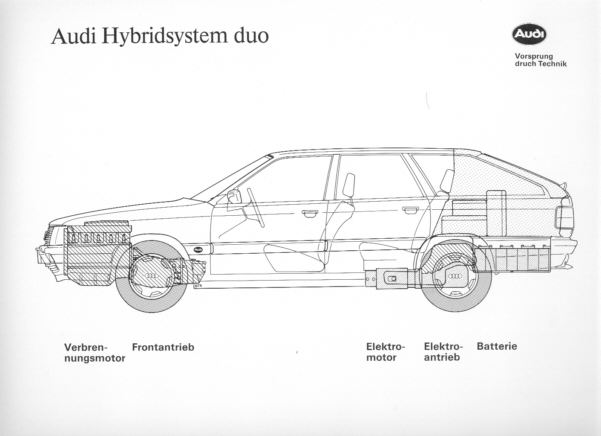 At the Geneva Motor Show in March 1990 Audi presented its first iteration of the Audi Duo (or Audi 100 Avant Duo) experimental vehicle, a plug-in parallel hybrid based on the Audi 100 Avant quattro. This car had a 12.6 bhp (9.4 kW) Siemens electric motor which drove the rear wheels. A trunk-mounted nickel-cadmium battery supplied energy to the motor that drove the rear wheels. The vehicle’s front wheels were powered by a 2.3-litre five-cylinder engine with an output of 136 PS (100 kW; 134 hp). The intent was to produce a vehicle which could operate on the engine in the country and electric mode in the city. Mode of operation could be selected by the driver. Ten vehicles are believed to have been made; one drawback was the extra weight of the electric drive, making vehicles less efficient when running on their engines alone than standard Audi 100s with the same engine. 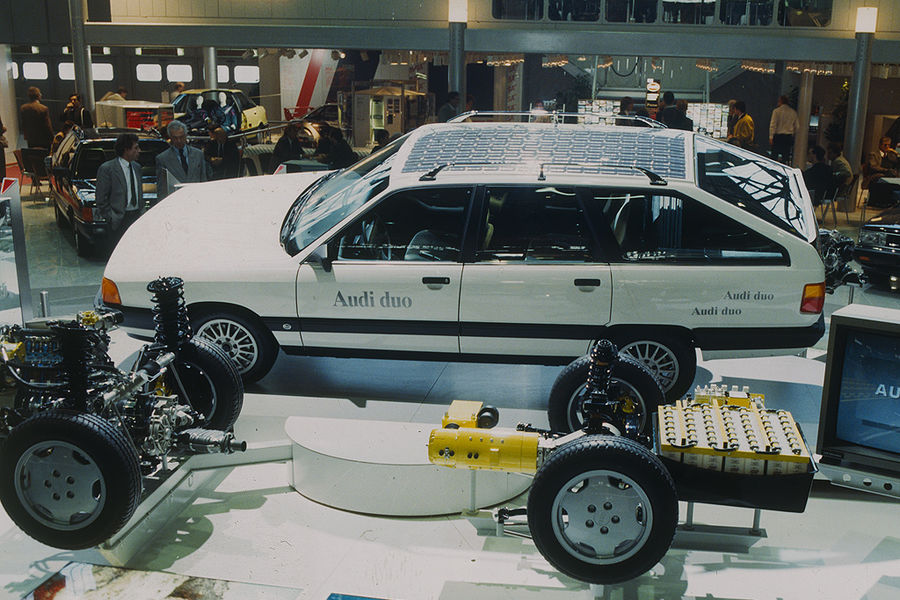 Audi 100 Duo second generation concept car was introduced in 1991. It featured Audi’s ‘trademark’ quattro permanent four-wheel drive system. Powered by a four-cylinder 2.0 L engine with 85 kilowatts (116 PS; 114 bhp), with a 21 kilowatts (29 PS; 28 bhp) electric motor for the rear wheels when required. In electric mode the front axle was disconnected, and in this mode the Duo could reach a claimed top speed of 65 km/h (40.4 mph) and the sodium-sulfur battery sufficient for 80 km (49.71 miles).

The Audi Duo III was introduced in 1997, based on the Audi A4 Avant, and was the only Duo to ever make it into series production. The Duo III used the 1.9-litre (120 cu in) Turbocharged Direct Injection (TDI) diesel engine producing 66 kW (90 PS; 89 bhp), which was coupled with a 21 kW (29 PS; 28 bhp) water-cooled electric motor. Both engine and motor powered the front wheels only, unlike the two previous concept Duos. There was a switch inside the cabin for changing between the electric motor and the engine. The batteries would be recharged during highway or country driving, or by plugging the car into an AC power outlet. The electric motor could also recover energy during deceleration and in electric mode the Duo had a range of approximately 50 kilometers (31.07 miles) and a top speed of 80 km/h (49.7 mph).

The hybrid was unable to achieve fuel efficiency much greater than the standard 1.9 TDI, due to the extra weight the lead gelatin batteries added. There was little demand for this hybrid due to its high price, and thus only about 100 Duos were produced. The Duo was the first European hybrid ever put into production and up until early 2011 the only Audi.

Audi is using the ‘Q’ for the designation of their quattro four-wheel drive system. It is the first SUV offering from Audi in 2006. Later, Audi’s second SUV, the Q5, was unveiled as a 2009 model.

Audi unveiled the Audi Q7 hybrid 4.2 FSI quattro, which uses their Fuel Stratified Injection (FSI) 4.2 litre V8 engine, at the 2005 Frankfurt Motor Show. The Audi Q7 is a full-size luxury crossover SUV unveiled in September 2005 at the Frankfurt Motor Show. Audi has since unveiled a third SUV model, the Q3, going on sale in the 3rd quarter of 2011. Previewed by the Audi Pikes Peak quattro concept car, the Q7 shares its platform and chassis with the Volkswagen Touareg and the Porsche Cayenne.

The second generation Audi Q7 was unveiled in January 2015 at the North American International Auto Show in Detroit. The diesel- and petrol-powered versions will be released for retail sales in 2015, followed shortly by diesel-powered plug-in hybrid variant, which will be sold in Europe and the U.S. The plug-in hybrid, called the Q7 e-tron, is powered by a 3.0 TDI V6 diesel engine mated with two electric motors, one placed in the gearbox, and the other on the rear axle to provide a total of 373hp and 700nm of torque, four-wheel drive. The motors are powered by 17.3kWh lithium-ion battery expected to deliver an all-electric range of 56 km (35 mi). 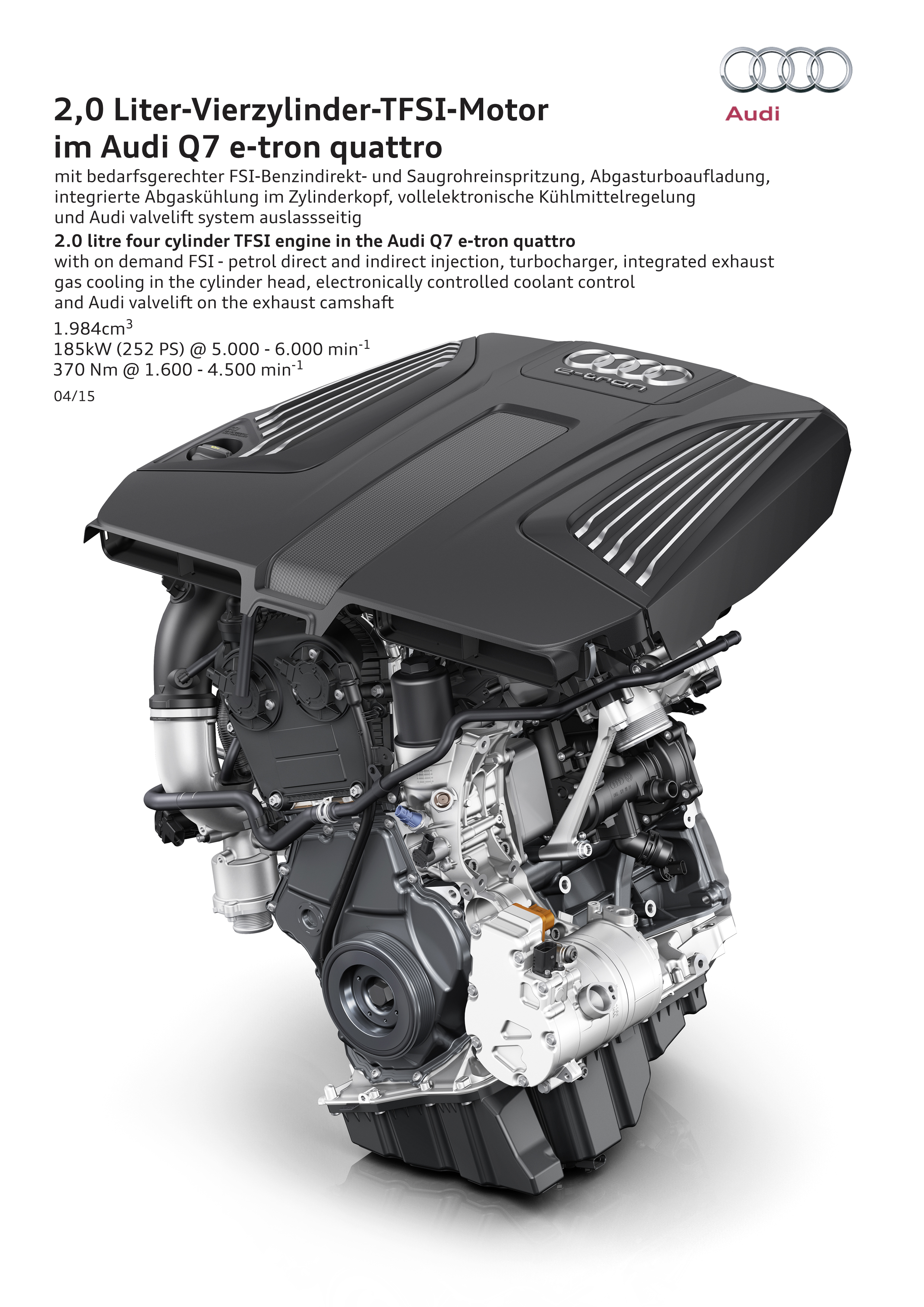 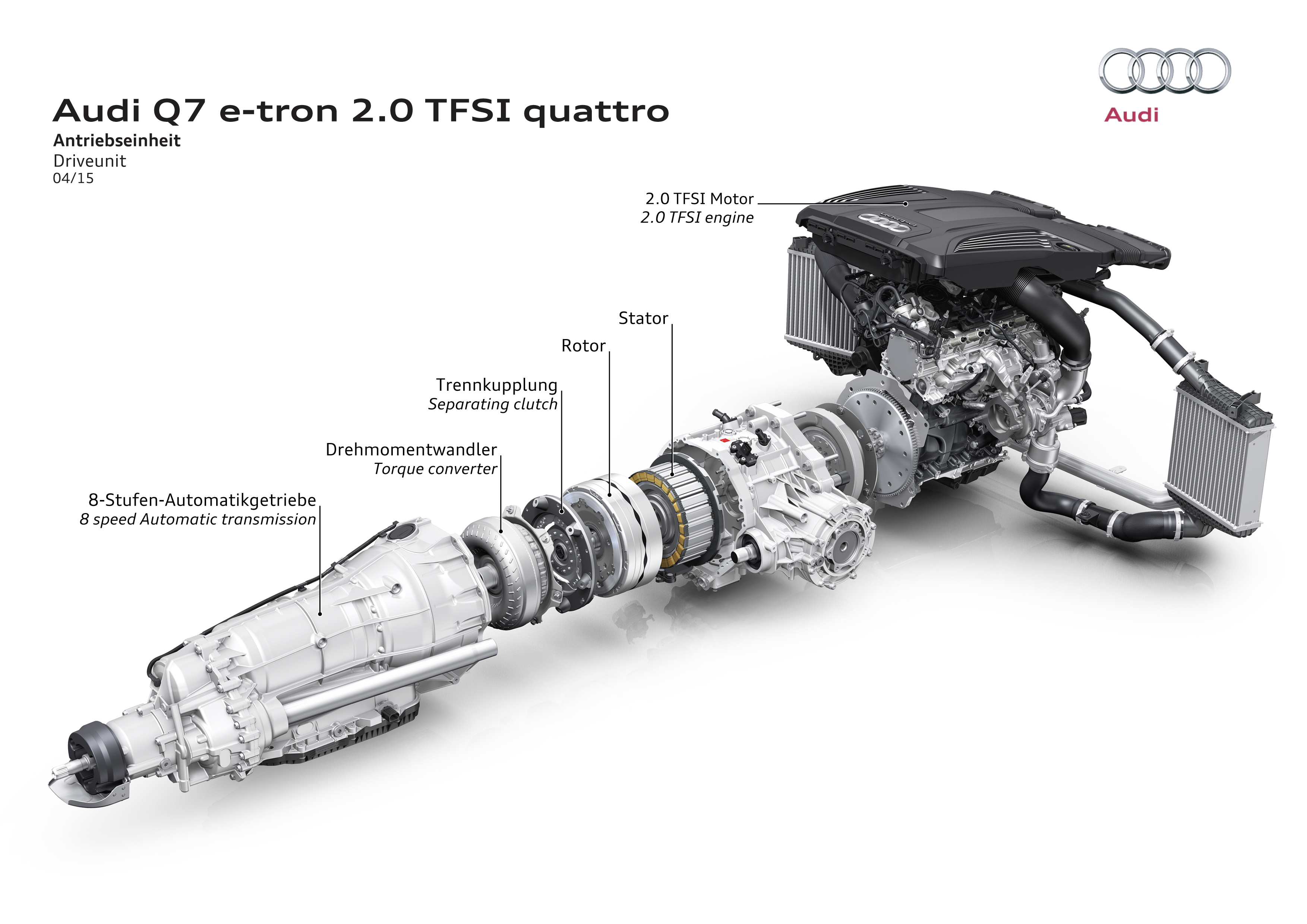 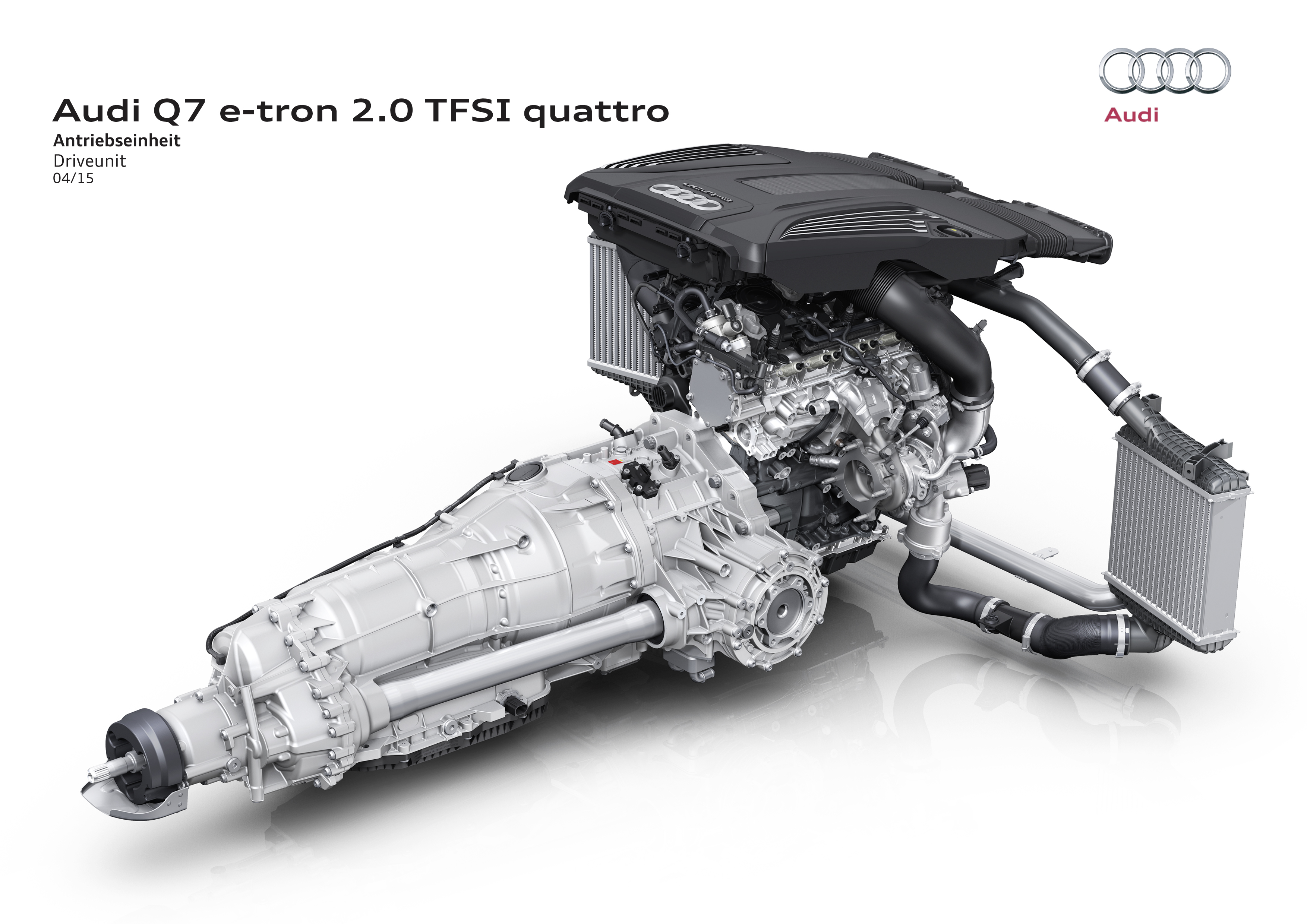 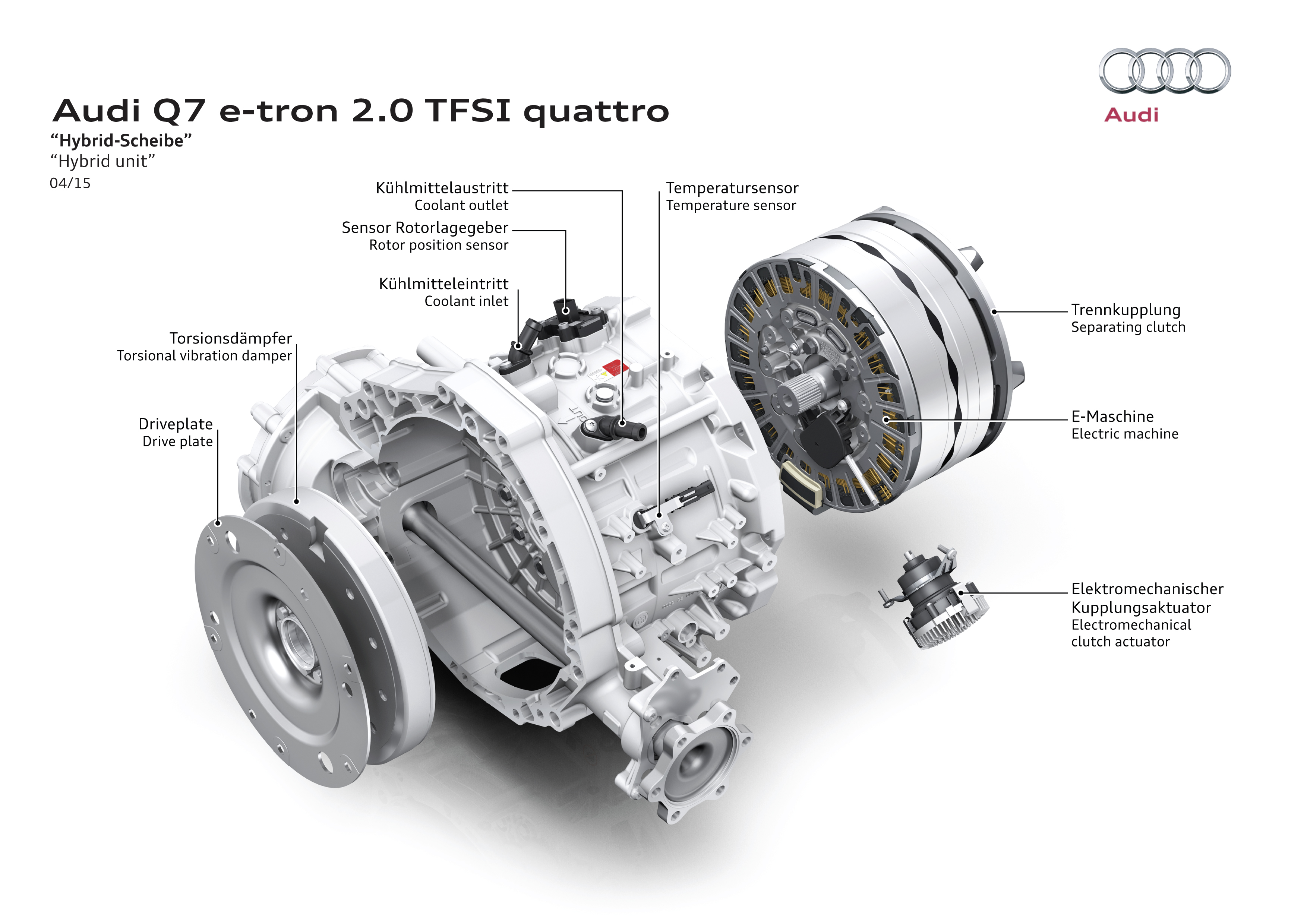 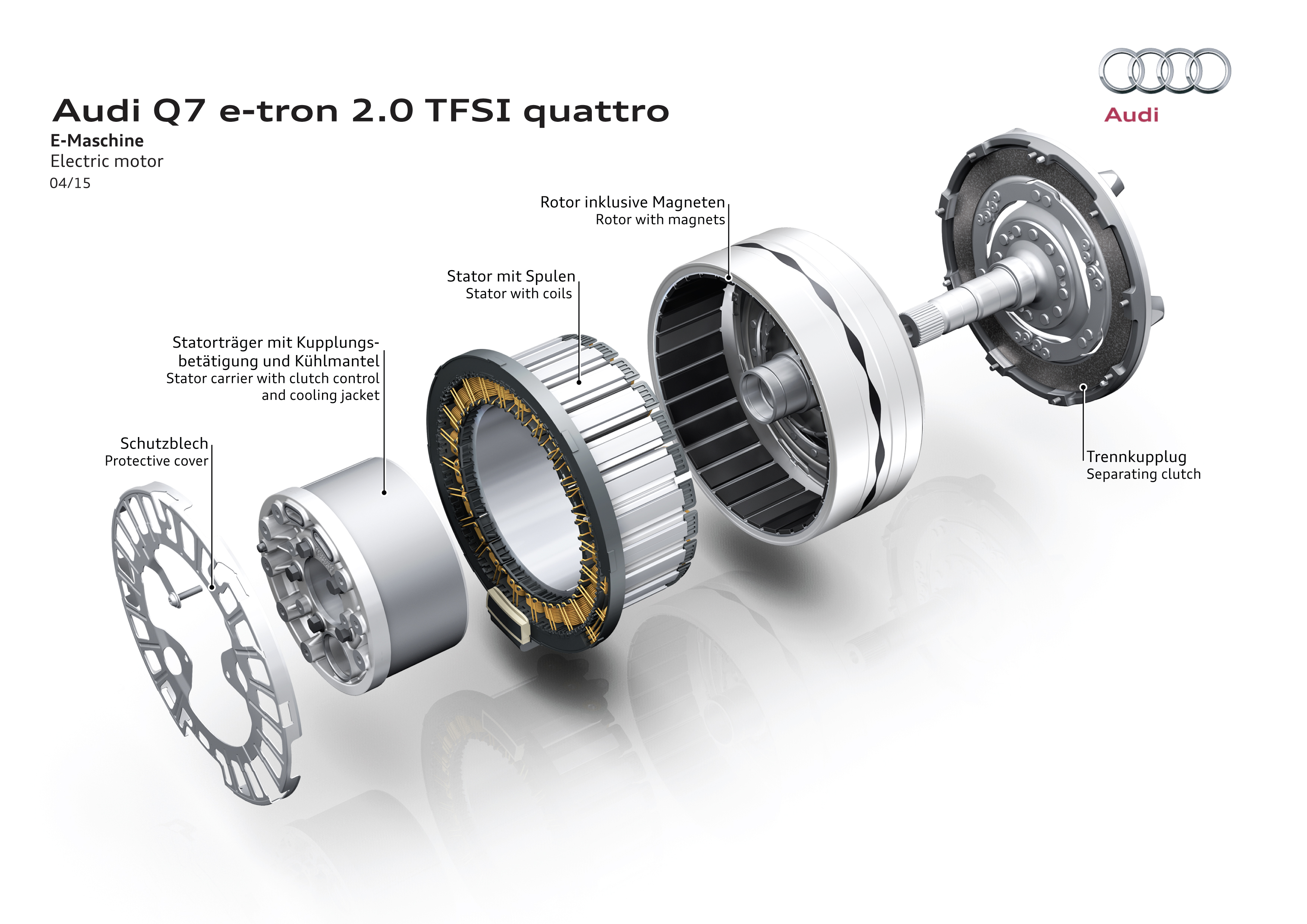 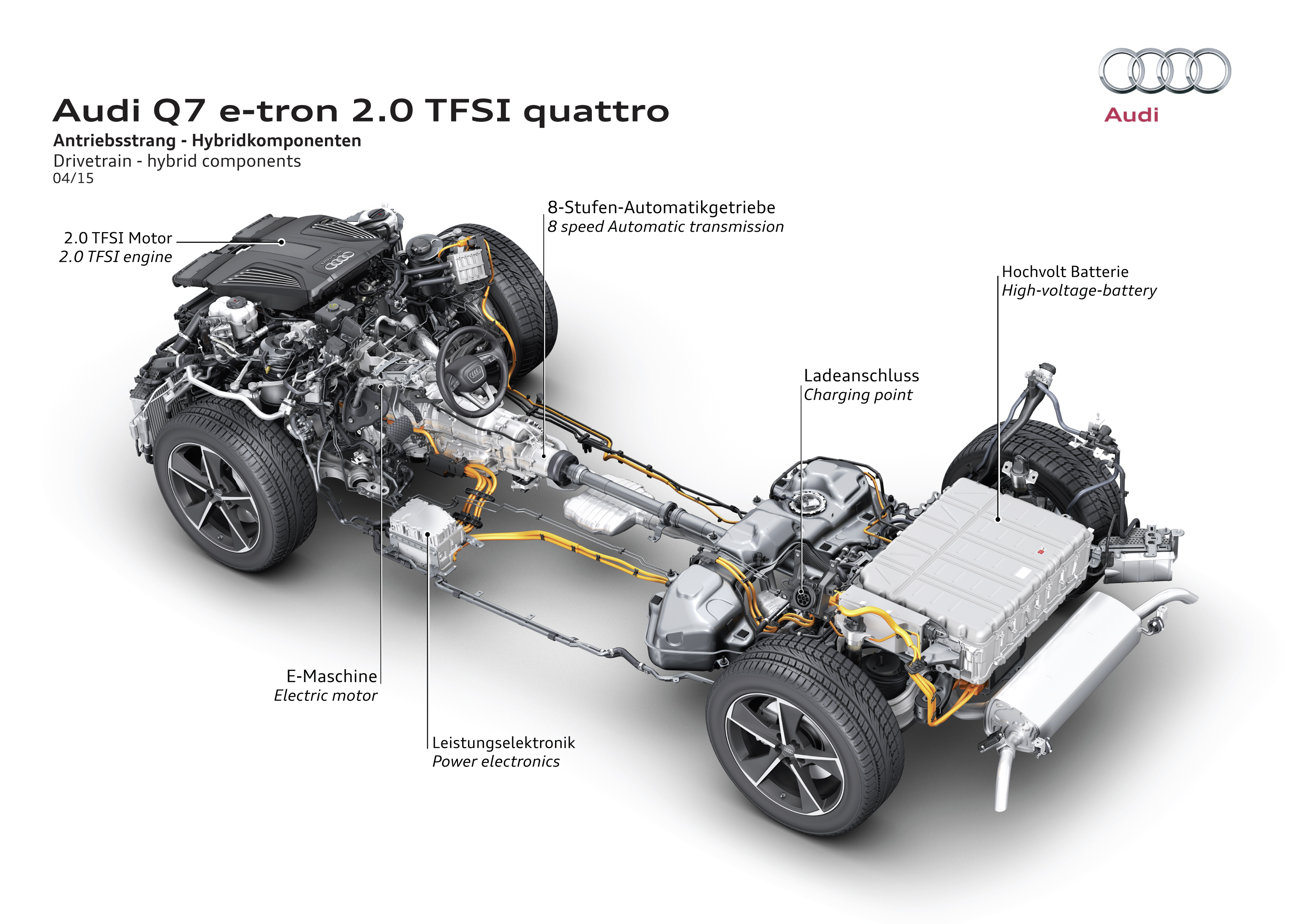 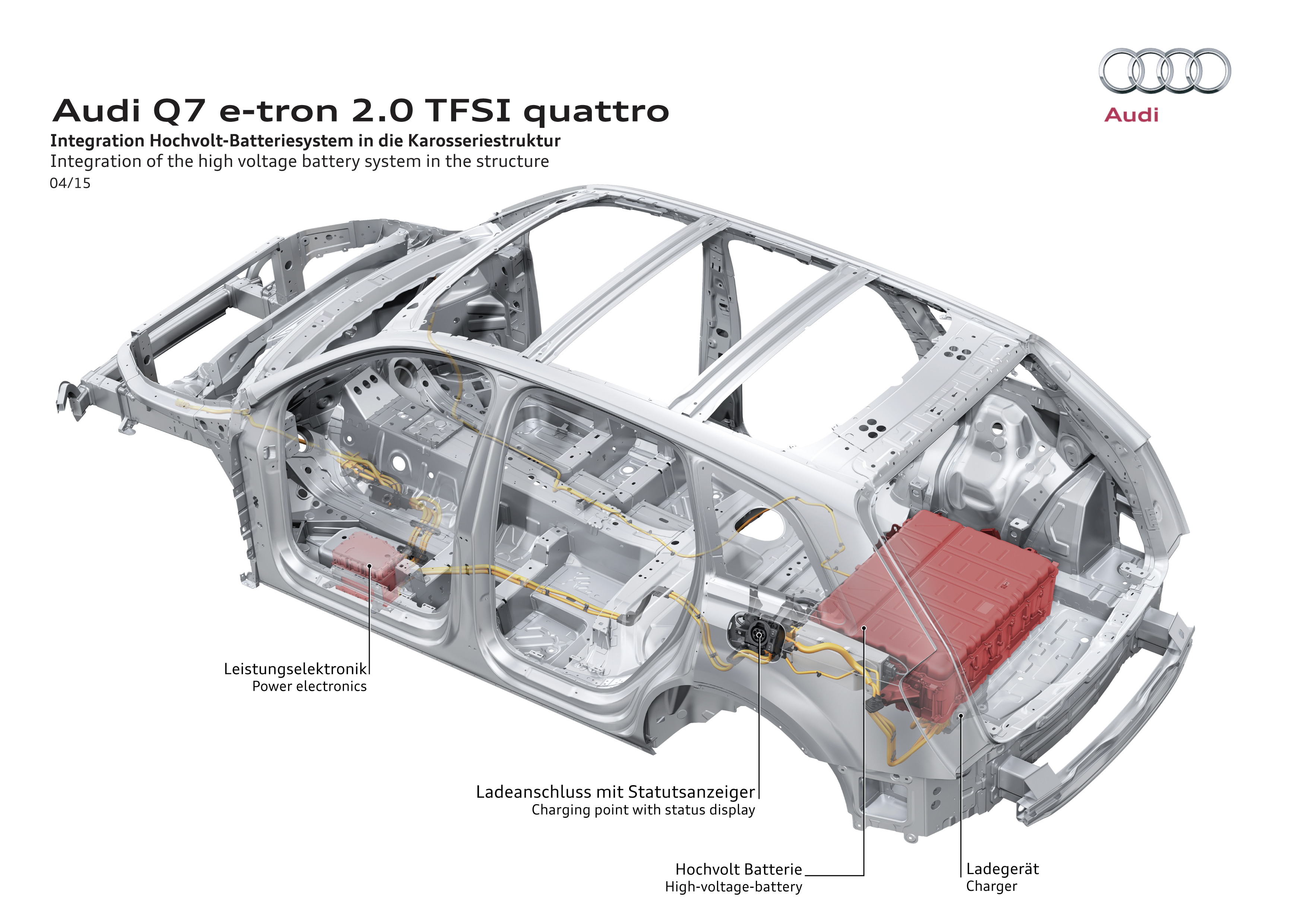 The Q7 is the first Audi SUV to use very-high-speed FlexRay optical fiber data bus technology, which interconnects all electrical/electronic systems, particularly the latest generation Multi Media Interface, Adaptive Air Suspension, and the multitude of new driver assistance systems, since all these require very high data bit rates. The Q7 features up to 4 Nvidia Tegra processors.

Matrix LED State of the art digitally controlled adaptive non-glare highbeam multi-LED headlamps. The highbeam comprises 25 individual light-emitting diodes per unit that can be switched on and off or dimmed individually depending on the situation. This enables the headlight system to react extremely precisely to other vehicles while always brightly illuminating the road. Additional features of the new headlights are the intelligent cornering light, new-look daytime running lights and dynamic turn signals. The lighting system uses predictive route data from the navigation system to adjust the distribution of light in response to the current driving situation. In combination with the optional Navigation plus with MMI touch, the system recognizes route data contained in the navigation system, such as curves and road classifications.

Our incredible Matrix Beam headlights are made up of five separate LED units which automatically detect light from other vehicles on the road. When another car’s headlights are detected ahead, individual LEDs intuitively switch off to effectively split the full-beam and avoid dazzling fellow drivers. This means that you can get a better view of that dark country road with your full-beam headlights constantly on. Watch our video to see Matrix Beam technology in action.

Bonus around the World Wide Web

The team of CEA had a chance to ask him some questions about Audi’s global strategy, CES Asia and his upcoming keynote:

What made you want to participate in the inaugural International CES Asia?

‘Audi is the premium manufacturer with the most experience in producing automobiles in China – we started in 1988. So it is no coincidence that our brand is the most successful luxury car brand there. In 2014, we delivered 578,900 automobiles in China, which has been the single most important market for us for several years. Audi was the first European automotive manufacturer to give a keynote at CES in Las Vegas. As a pioneer in Asia and as a pioneer in automotive electronics, we were therefore delighted to be asked to give the opening keynote at the first CES Asia in Shanghai.’

Why is the Asian market important to Audi’s global strategy?

‘China is by far the biggest and fastest growing market in the automotive world. Even though Audi has been the No. 1 premium brand in China for years, we sold almost 18 percent more automobiles there in 2014 than in the year before. There are more markets with excellent growth potential in several other Asian countries as well. This is one of the reasons why we opened our R&D center in Beijing for China and the whole region in 2013.’

Dr. Hackenberg comes back on stage to speak about the premiering @Audi R8 Etron with piloted driving. #CESAsia pic.twitter.com/X6qRruN7vT