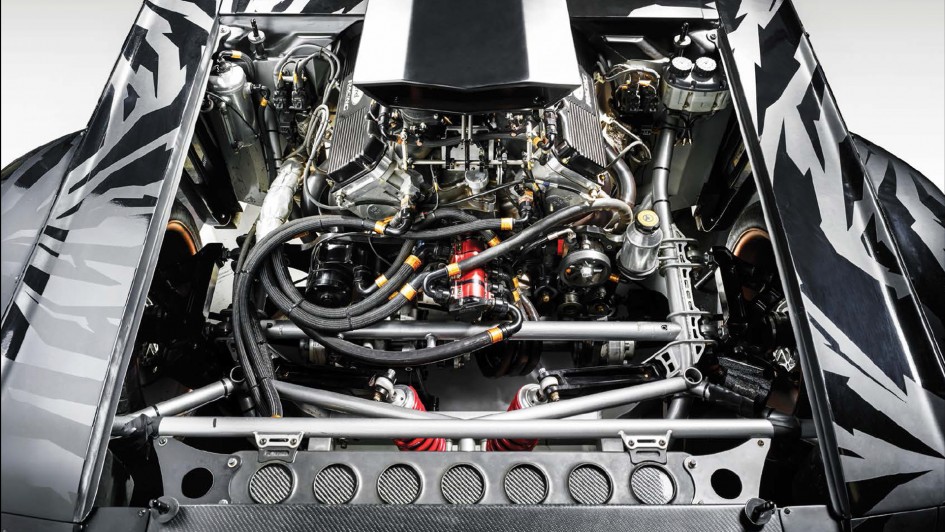 ‘Mustang purists look away; Ken Block’s first-gen 1965 Ford Mustang, also known as ‘The Hoonicorn’, is not exactly what you’d call period correct. An 845hp Roush Yates Ford V8 gulps down air through eight individual throttles reaching through the hood as it sends 845 horsepower to all four wheels via a custom six-speed sequential dogbox and all-wheel drive driveline. Custom built from the ground up and created for slaying tyres and not much else, simply put, the Hoonicorn is the automotive embodiment of pure, unadulterated terror.’ - Need for Speed 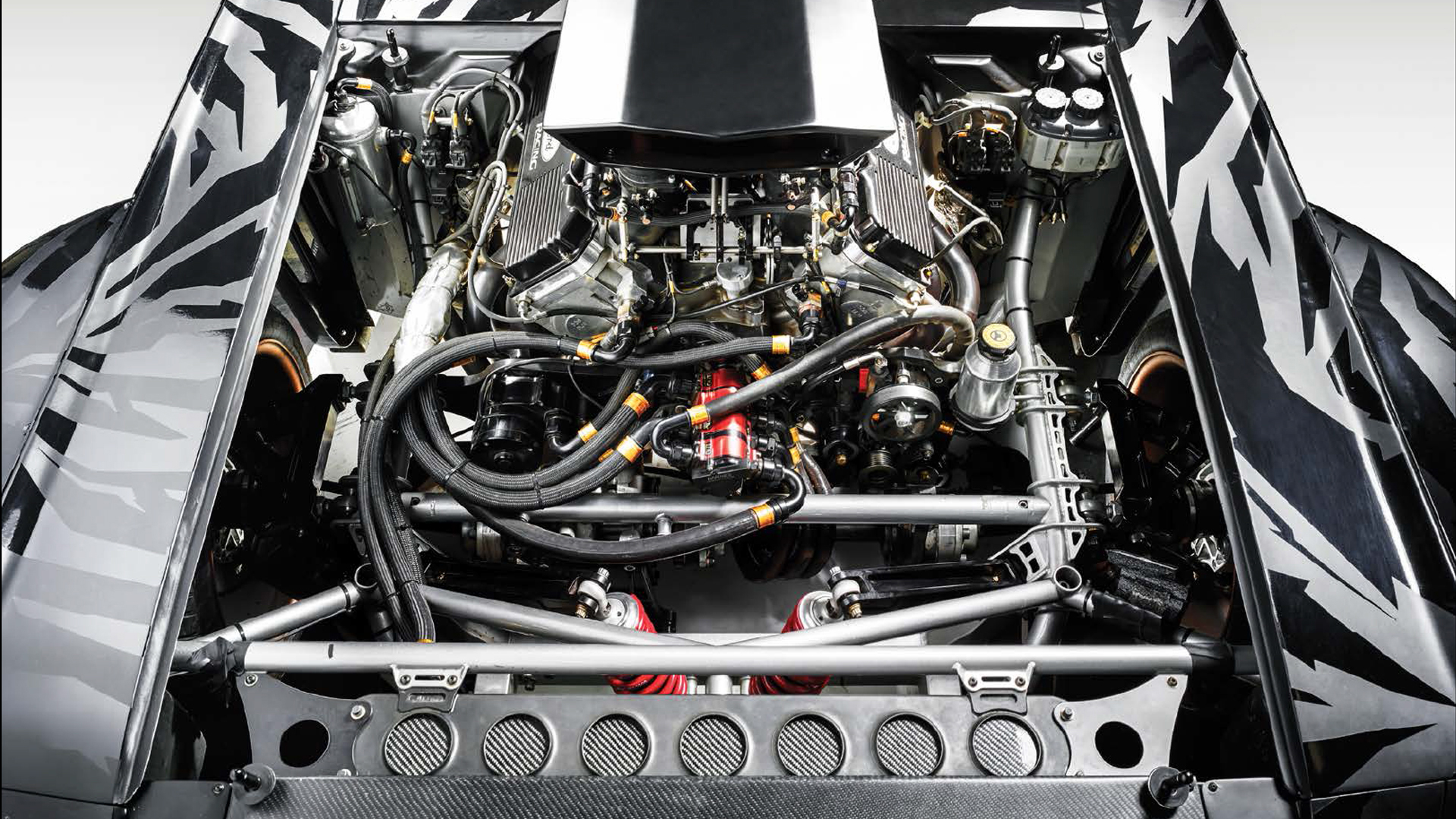 The ‘RTR’ in the name of the car means ‘Ready To Rock’ qui est préparateur de Mustang.

‘Mustang RTR is the vision of World Champion drifter and Mustang mad man, Vaughn Gittin Jr. When creating RTR, his dream was to introduce something new to the Mustang world that appeals not only to younger generations, but also to any traditional muscle car enthusiasts and overall automotive enthusiasts as a whole. The Mustang RTR takes the best of multiple automotive cultures and tastefully meshes them together into a final product that anyone can immediately appreciate and see themselves behind the wheel of – whether they are slaying a set of tires, blasting a straight, carving some turns, linking a section on the drift circuit, or simply just cruising along with their better half. Vaughn has successfully made his dream a reality with the Mustang RTR. This new generation brand of Mustang that comes in the form of a dealer-installed package is currently available in select Ford dealerships around the world.’ - MustangRTR.com

Built at ASD Motorsports in Charlotte, North Carolina, over the course of two years, the car is based upon a 1965 Ford Mustang notchback—the iconic pony car, which is celebrating its 50th anniversary this year. The car was heavily modified by RTR and ASD Motorsports to feature a 410 cubic inch Roush Yates V8, with 845 hp, mated to a one-off Sadev all-wheel drive system. The styling for the build harnesses a mix of influences and inspirations that include the current crop of WRC cars, DTM cars and even toy cars from Block’s youth. These elements were harnessed through a collaborative effort between Block and RTR—since RTR is known for their Mustang expertise—and incorporated into the build.

“I’m stoked to be able to publicly unveil this car for the first time at SEMA in the Ford booth. This is a project that I’ve been working on for two years, so to see it fully come to fruition and be able to drive it for Gymkhana SEVEN was absolutely amazing. I also knew that working with Vaughn Gittin Jr. and his RTR team was the right choice for this project since Mustang’s are their world, but they really went above and beyond on this car. The attention to detail with the fabrication and bodywork blows my mind. This is hands-down the best Gymkhana car I’ve had yet.” – Ken Block

« That’s why Mr. Block assembled a dream team to not only think up the plot of their newest film, but also its newest star – a truly bespoke creation that’s a perfect fit for our The Creators theme. It took Hoonigan Racing Division, RTR and ASD Motorsports, plus a host of other players to conceptualize and create the Hoonicorn RTR over a secrecy-shrouded span of two years. » - Speedhunters 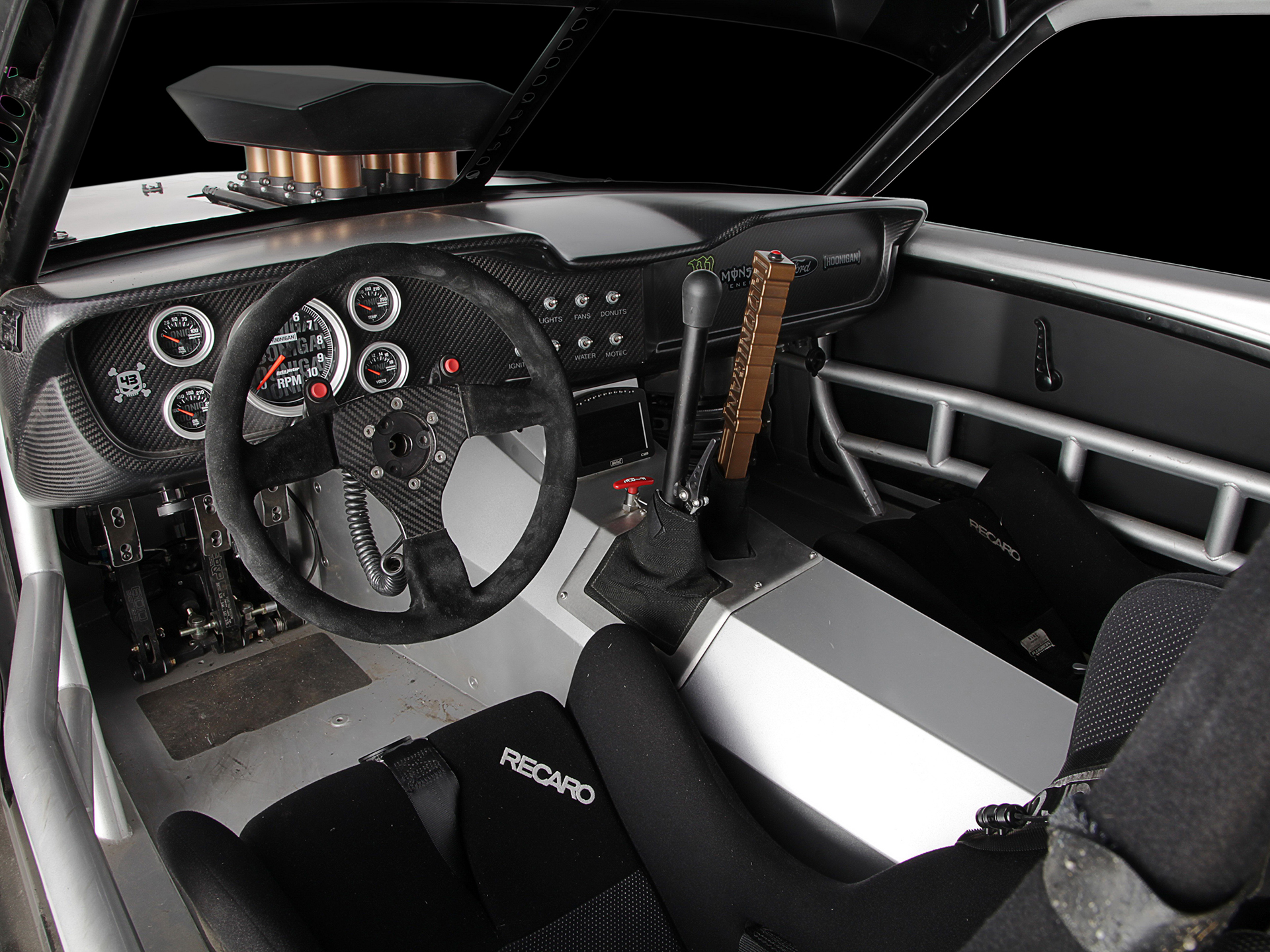 It was this extreme degree of secrecy that intrigued me most. Ken wanted it to be special by the time Gymkhana Seven was released, so the code name ‘Unicorn’ was used in all correspondence during the build. From there, ‘Hoonicorn’ just seemed natural.

Want to know more? Yeah, I did too.
Team Director of Hoonigan Racing Division, was willing to fill me in on this epic build.
Go to Speedhunters.com

Starting with a ’65 bodyshell, ASD Motorsports quickly scrapped the stock floors and subframe in favor of an entirely new structure. The scratch-built chassis required tons of fabrication, but don’t forget about the months of engineering that took place even before the tubing was bent and notched.
…
It’s really no surprise if you’ve followed Ken Block’s career driving AWD rally cars, but on the other hand it’s quite shocking to realize that you’re looking at a 1965 Mustang that can send all four tires desperately clawing for grip across any surface.
…
So, while packaging an extra ST03 diff in the front, ASD also had to plan around a modified Sadev SC90-24 offroad transmission. There’s also the special hydraulic handbrake which not only locks the rear wheels, but simultaneously cuts power to them by disengaging the center differential.
… 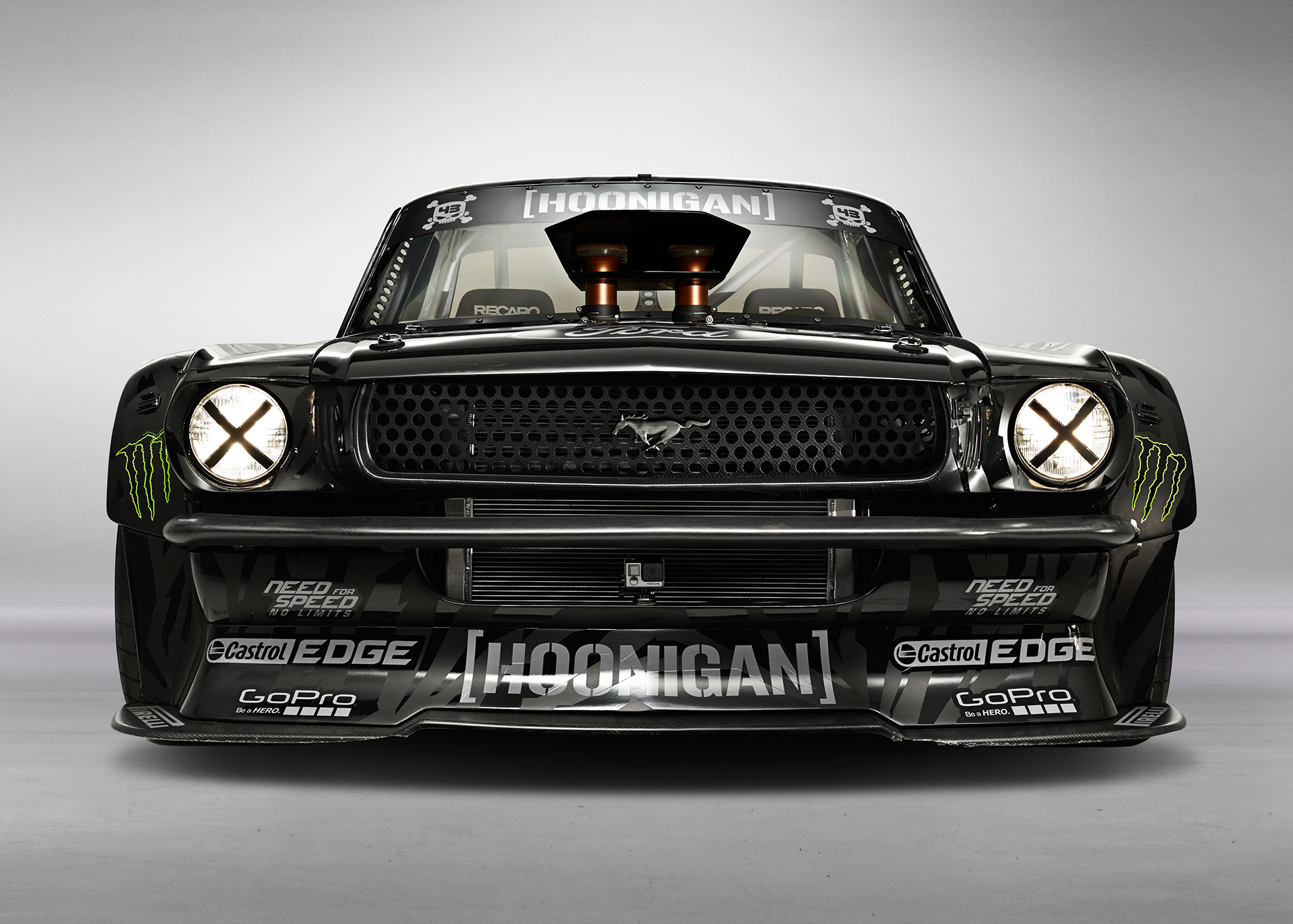 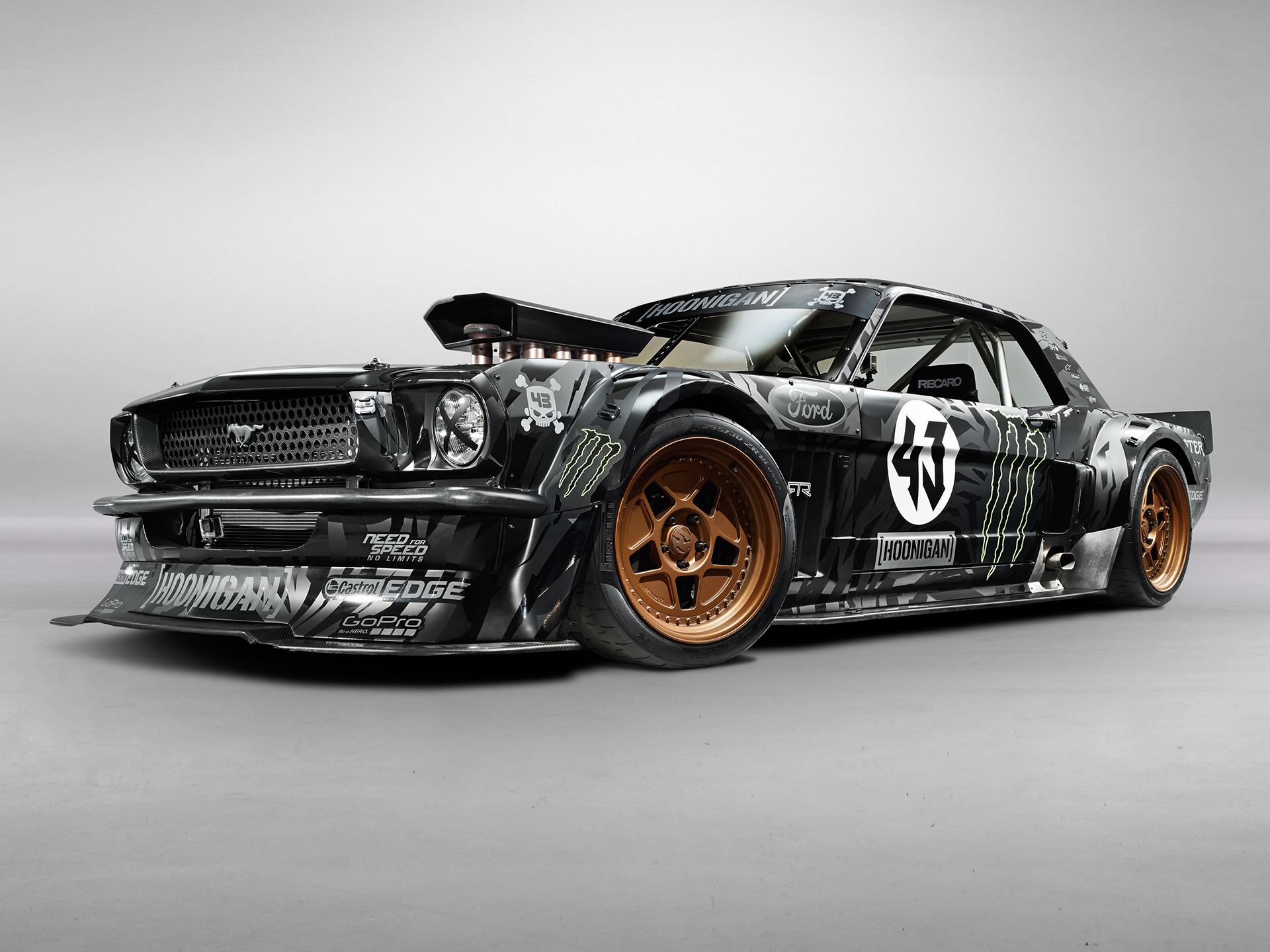 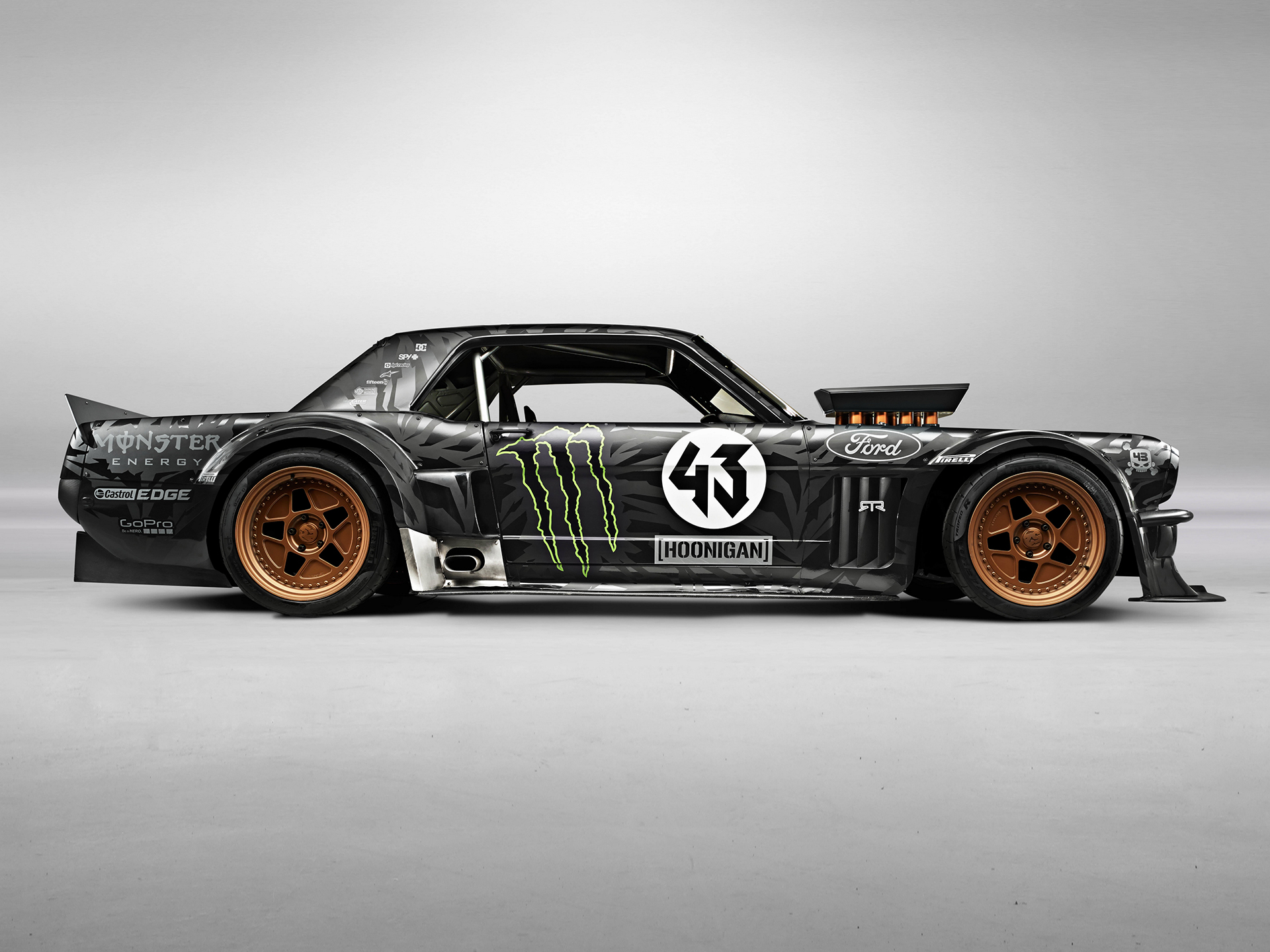 While moving upward, the tires were also shoved out. Way out. This required a set of bespoke, carbon fiber bolt-on flares, with a cutaway look reminiscent of a World Rally Car that slept with a late-model stock car. The true benefit though is that tire smoke can be released at will, thanks to the massive amounts of exposed tread. The Pirelli Trofeo Rs are a Ken Block special too, with deeper sipes and a custom compound that makes extra puffs per revolution. He even gets his name printed on each one.
…
The team showed up with around 20 of the three-piece fifteen52 R40 wheels, tires already mounted, for a day of filming. With a film crew on standby, time is of the essence. Destroyed tires are thrown in a pile so filming can commence as quickly as possible.
…
I only bring this up because the engine of choice is far removed from the pressurized four cylinders we’ve seen in the past. 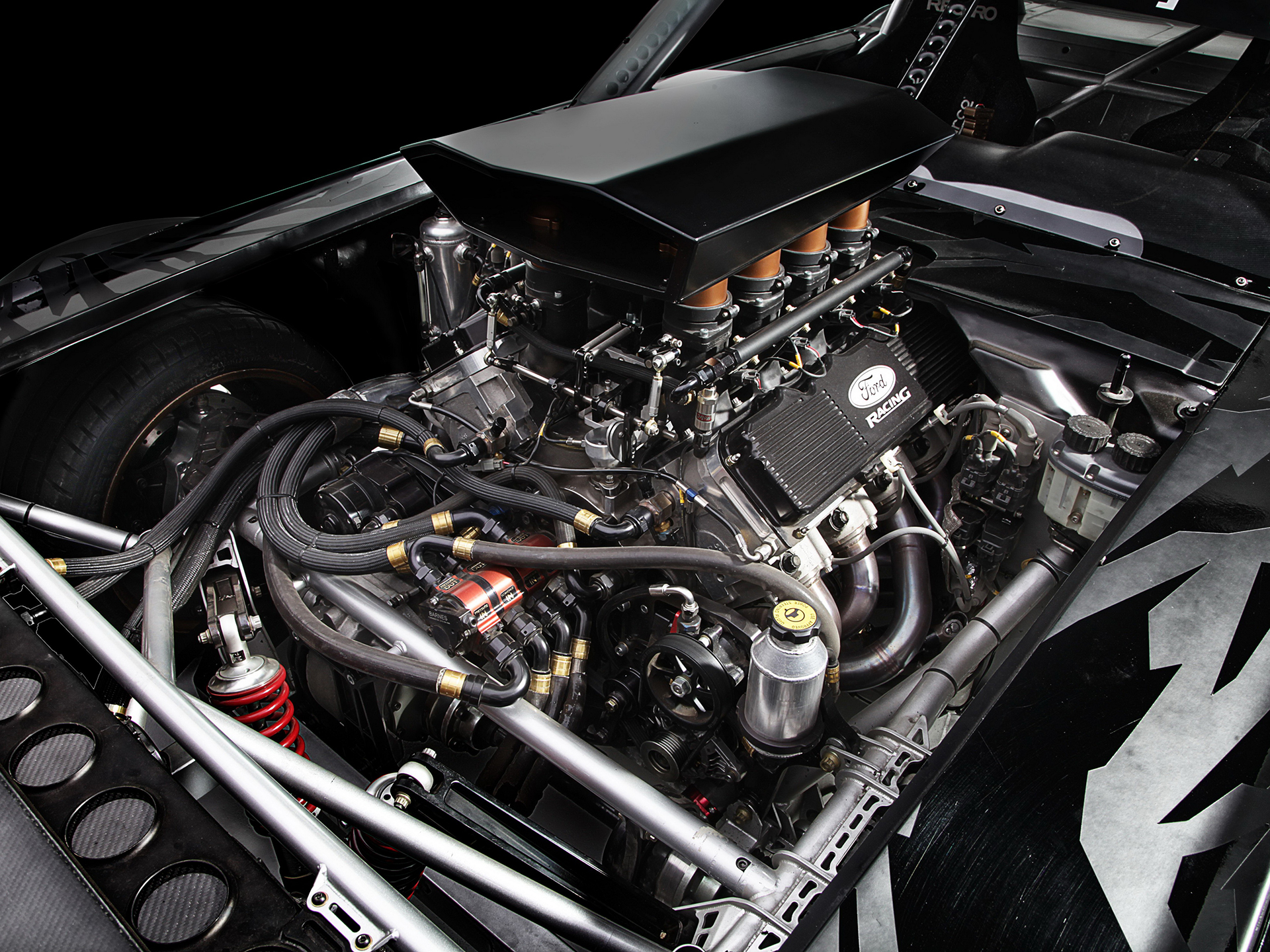 With the involvement of RTR, you’d better believe this Mustang was going to have a big V8 engine. Ford Racing provided a 410 cubic inch Roush Yates V8 that makes 845hp and 720lb/ft, au natural. It’s quite similar to the powerplant in Vaughn Gittin Jr.’s drift car, in fact. 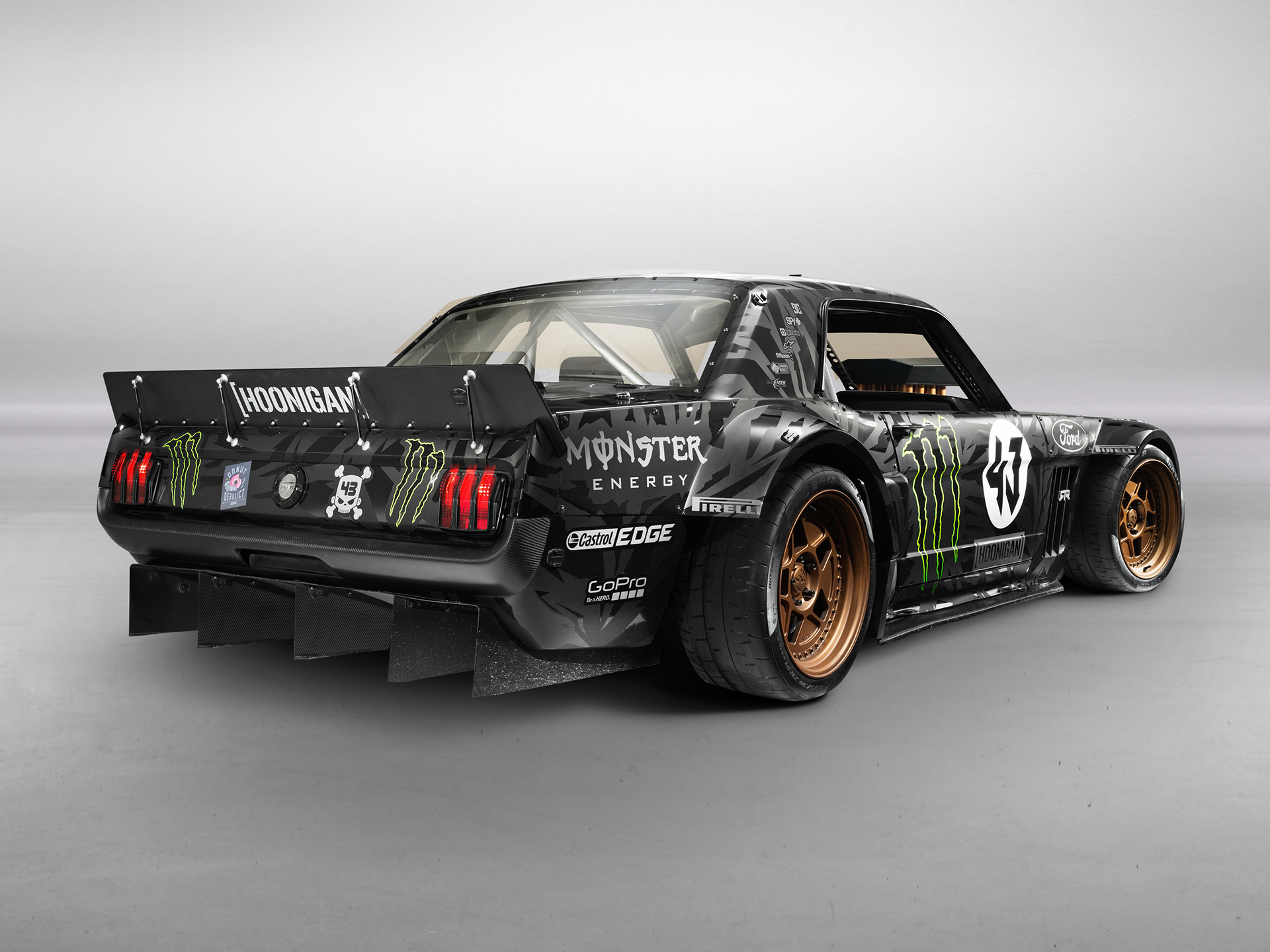 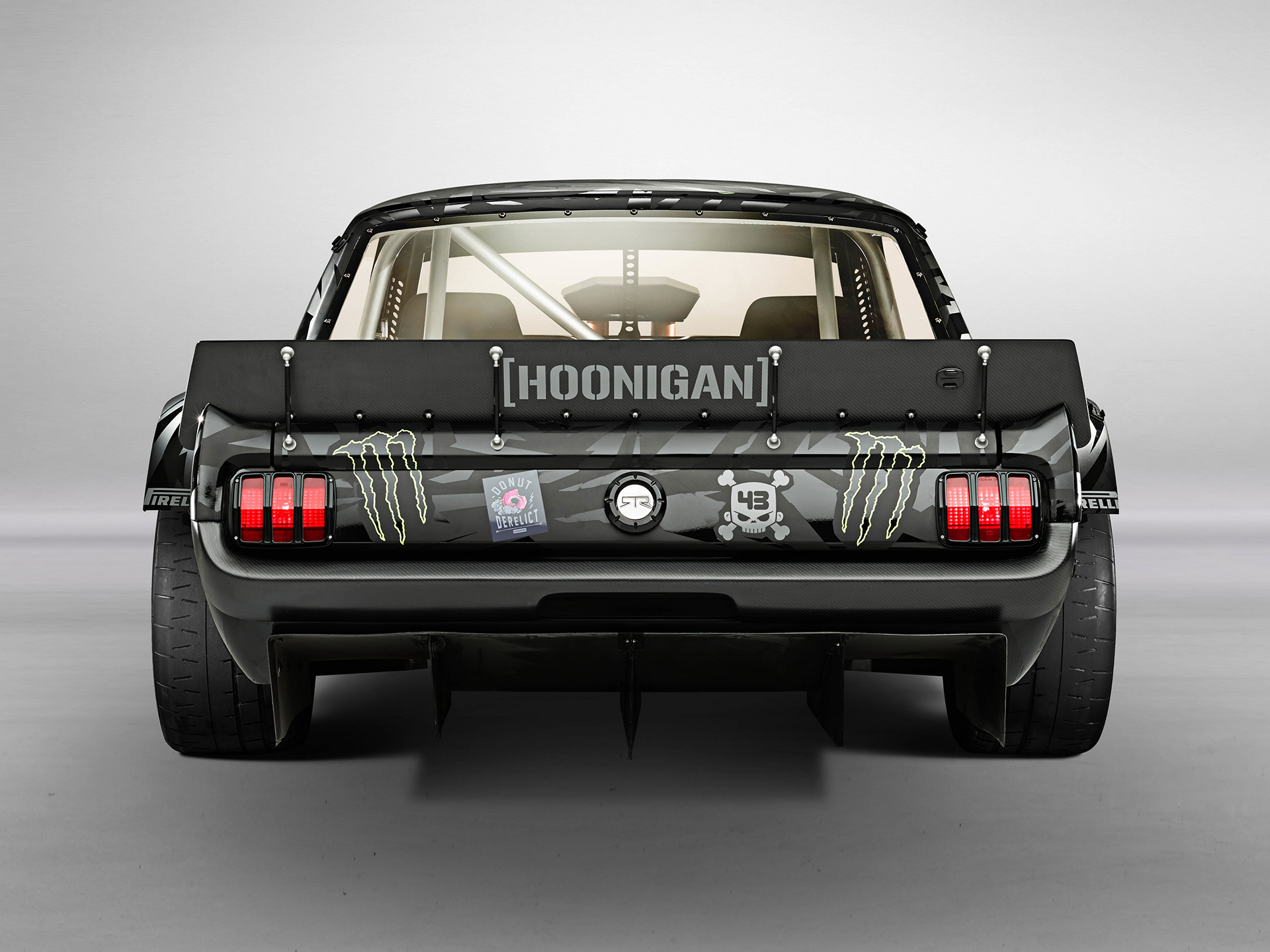 So what if it obstructs his view out the windshield? Ken planned on being sideways the whole time anyways. The hood scoop was actually a feature that was decided upon very early in development, and I would argue that it is the one piece that absolutely defines the visual identity of Hoonicorn.
…
Why did it take this long for someone to look at the iconic pony and visualize something as wild as Hoonicorn RTR? I suppose it’s because guys like Ken Block only come along every so often. … There’s just one problem Mr. Block. This time the car’s outdone you. 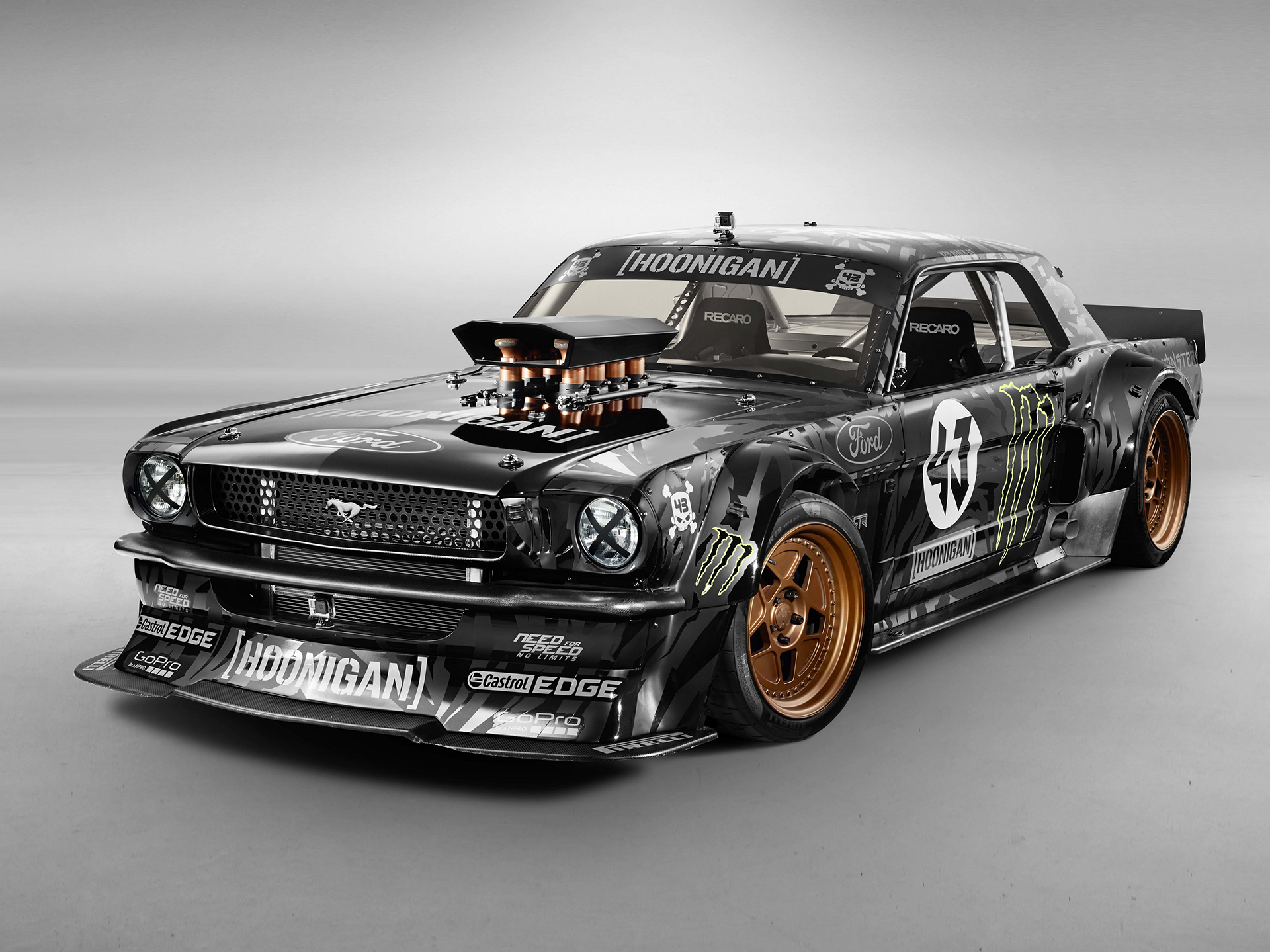 Well, here it is! Exclusive first-ever footage of me doing some proper #hooning in my Hoonicorn RTR… in video game form! So wild to me that my ultimate Gymkhana car from #GYM7 is now an actual playable vehicle in the new @NeedForSpeed. #lifegoalslevelunlocked #GamesCom2015 #NeedForSpeed #Hoonicorn