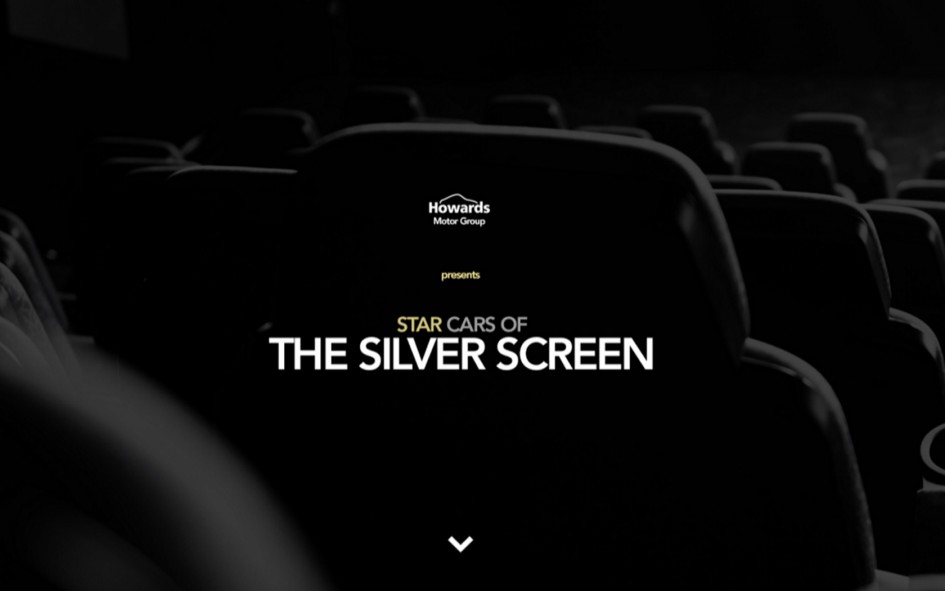 Star Cars of The Silver Screen

There’s no denying that cars and movies go hand in hand. In fact, you’d be hard pushed to name a single big hit film that doesn’t feature at least one. From James Bond to Doc Brown, countless leading film characters have been defined by the cars they drive. In addition, there’s tons of films where arguably the cars them selves play a leading role, the Fast & Furious franchise, Transformers and Gone in 60 Seconds to name just a few. With this in mind we present to you, courtesy of Howards Group, a run down of no fewer than 27 of the most iconic cars to ever have graced the silver screen. We’ve listed a few of our favourites below, but be sure to scroll on down to the Infographic and peruse your eyes over all 27.

Take a trip through cinema history and look at some of the most famous and iconic Movie Cars from Howards Motor Group.

Take a look at our Star Cars of The Silver Screen infographic which includes our favourite iconic movie cars which have featured in popular films over the years.

The cars featured on this infographic include;

1964’s ‘Goldfinger’, the third film in the James Bond series, saw the introduction of a new car for bond- the Aston Martin DB5.

The main car in the film was a customized 1968 Paragon Panther. Writer Ian Fleming based the car on the aero-engine racing cars which were built in the early 1920’s.

The 1963 Volkswagen Beetle Deluxe was painted pearl white. The car would usually have matching interior but instead this was painted a non-reflective grey for filming purposes to help prevent camera lights glaring.

Character Frank Bullitt drove a 1968 Ford Mustang 390 GT 2+2 Fastback. For the famous chase scene Steve McQueen made a point of keeping his face near the open window so everyone would know that it was him and not a stuntman. The Italian Job 1969- Three 1968 Austin Mk 1 Mini Coopers

Three 1968 Austin Mk 1 Mini Coopers were used and during the chase scene the 3 minis always stayed in the order red, white and blue, to match the colours of the Union Jack.

The famous car used in the 40 minute chase scene at the end of the film was a 1973 Ford Mustang Mach 1 which was named Eleanor. In the 97 minute long movie, a total of 93 cars were crashed.

The iconic car driven by Bandit in the film is a 1977 Pontiac Trans Am and 3 models were used for filming.

The famous race scene includes a modified white 1948 Ford De Luxe which was owned by the T-Birds.

The 1974 Customized Ford Falcon XB Interceptor known as ‘Pursuit Special’ is driven by Max Rocatansky at the end of Mad Max and for the first half of Mad Max 2: The Road Warrior.

The movie contains many iconic cars including an original Lamborghini Countach Lp 400S driven by characters Marcie and Jill.

The renowned vehicle used for the Ecto- 1 in the Ghostbusters movie is a 1959 Cadillac Chassis, built by the Miller-Meteor company. The car was originally designed for ambulance and hearse purposes.

Featured in all 3 films is the DeLorean time machine, which was deliberately picked for the films because of its futuristic appearance and gull wing doors. These features made it plausible that people in 1955 would think that the 1985 DeLorean vehicle was an alien spacecraft.

The car Ferris drives in the film is a 1961 Ferrari 250 GT California Spyder SWB which was a modified MG sports car rather than use an original.

The car belonging to Wayne and Garth in the movie was a sky-blue 1976 AMC Pacer which featured orange flames on each side. The cars top speed was only 90, but the model fitted the role perfectly.

In the film Austin owns a rare and iconic 1970 E-Type Jaguar which had both Union Jack interior and exterior.

The fictional Mystery Machine is a 1972 Ford Econoline – and the van first made its appearance in the 1969 cartoon series  cartoon series Scooby Doo, where are you?

Paul Walker personally handpicked all the racing cars in the film. The 1999 Nissan Skyline R34 GT-R used for the bridge stunt sustained a ruptured oil pan and severe damage to all four rims from the jump

The featured concept Audi RSQ was exclusively designed for the film. The car contained special features which were suggested by the director Alex Proyas which included spherical wheels, butterfly action doors and a colour changing paint job.

The Batmobile known as the ‘Tumbler’ is 9 feet wide, 16 feet long and has a top speed of 106 miles. It can reach 0-60 in 6 seconds, and the engine is a V8 Chevy. Even though Christian Bale played many of his own stunts, he wasn’t allowed anywhere near the Tumbler Batmobile.

In the film Casino Royale we saw the 2007 Aston Martin DBS V12 for the first time. In one afternoon of shooting three DBS V12’s valued at $300,000 each were destroyed to film the car roll sequence scene.

Bumblebee changes from a 1977 Camaro into a 2009 Chevrolet Camaro. At the time there were no running 2009 models so Saleen Inc. and Pontiac GTO used Camaro designs from GM to build a running 2009 Camero in 30 days especially for the film.

Tony Starks Acura in the film was custom made specifically for the movie by chief designer Dave Marek from Honda North America. It was created in 3 months, and the donor car used was 1992 NSX from Arizona with 252,000 miles on the clock.

Character James Hunt drives a replica of the original McLaren M26 Formula 1 in the film, which has since gone on auction between $1.2 and $1.6 million.

The Lykan HyperSport is a Middle Eastern supercar worth £2.3 million. It is destroyed when it jumps in between 3 buildings. The car has a top speed of 230mph, and it can achieve zero to 60 in less than 3 seconds.

The Aston Martin DB10 Featured in Bonds 24th big-screen outing is the companies most exclusive ever- a production ran of only 10 models.

Silver Screen? Silver Screen: The real name is called silver lenticular screen, is a type of projection screen that was popular in the early years of the motion picture industry. The term silver screen originated in reference to the actual silver content embedded in the material that made up the screen’s highly reflective surface. The term silver screen has passed into popular use as a way of referring to projection screens in general and motion picture projection screens, and also known for being used in threaters.