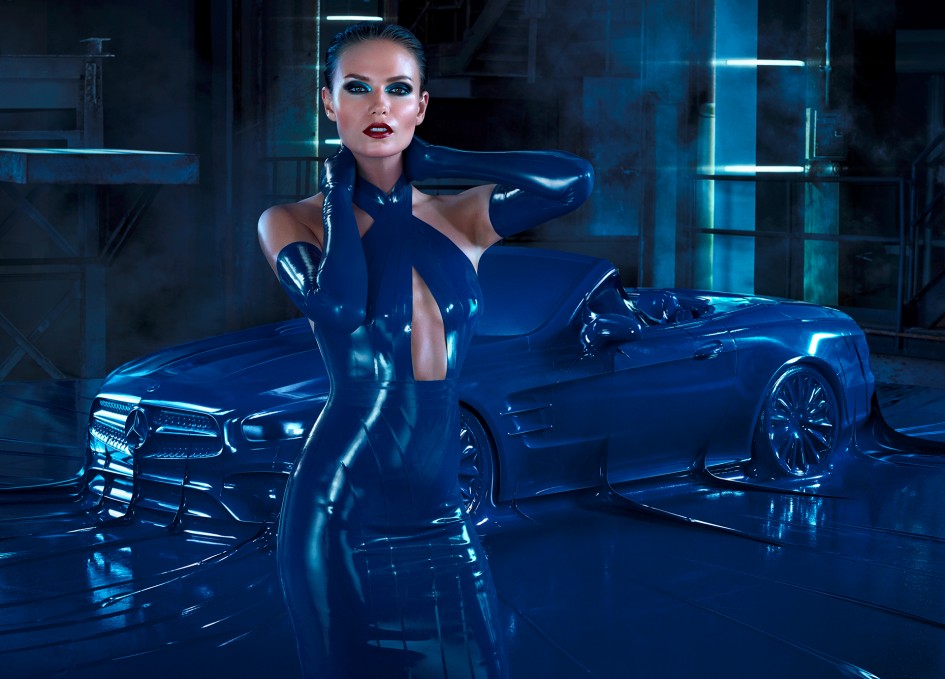 Video – Obsession with an Icon

Under the title « Obsession with an Icon » is the US photographer Jeff Bark, the new generation of the Mercedes-Benz SL and supermodel Natasha Poly – both in an « outfit » the designer Atsuko Kudo latex – in scene.

In the spotlight of the new campaign is the unmistakable design of the SL. His distinctive, sensuous design language is traced through clingy latex, the high-gloss, seemingly flowing material brings its dynamics perfectly. The Mercedes-Benz SL was clad with a 130 square meter, specially produced latex sheath. It consists of five tracks that were elaborately glued and polished by hand. Fits also contributes Fotomodel Natasha Poly a latex outfit that clings like a second skin on her body. The resulting images show the typical in Miami for Jeff Bark play with color effects and reminiscent of Pop-Art, hyperrealistic style.

The result is a fashion campaign for Fall / Winter 2016, which combines a courageous and innovative concept with consummate art.

The fashion film for fashion campaign for autumn / winter 2016 is the theme of the campaign ‘obsession with an Icon’ faithful. At the beginning of the film of the Mercedes-Benz SL drives away from the image. Natasha Poly is torn from the engine noise from sleep. They noticed that the car is no longer hidden under the latex sheath. Panic and anger flit across her face. On the surveillance cameras she sees that the SL is the move on the grounds. Full jealous anger she boils. There she finds the vehicle under his latex sheath and is relieved to find that it’s safe and sound much-loved car. So there is a happy ending!

Mercedes-Benz announces its Autumn/Winter 2016 Fashion Campaign and Film: Obsession with an Icon 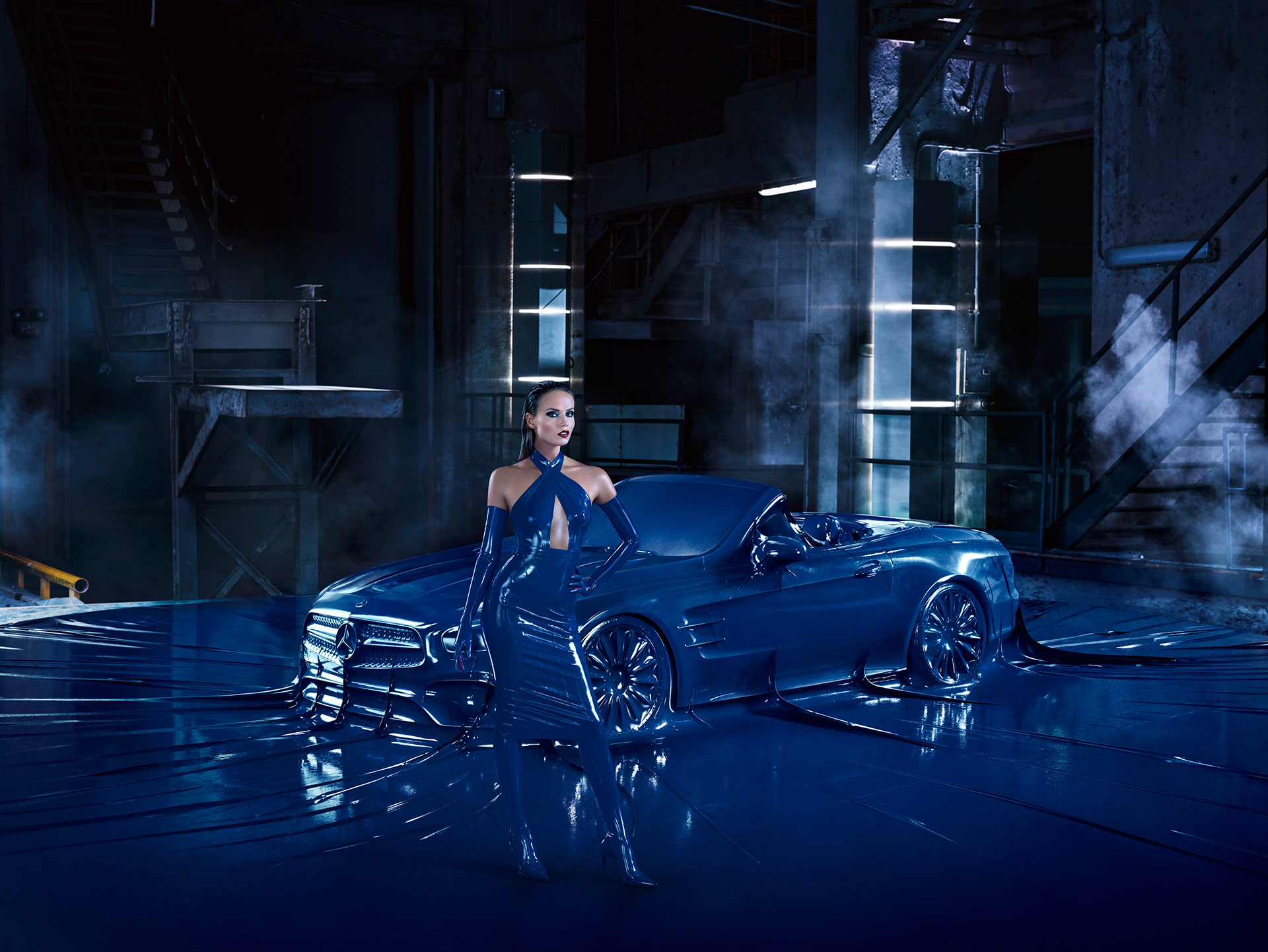 The campaign, Obsession with an Icon, puts the new SLs’ distinctive design in the spotlight, highlighting its sinuous lines and sensual curves in precise detail by wrapping the car in latex. The car is photographed alongside Natasha Poly, who wears matching body-hugging latex.

The campaign was shot in Miami, Florida by American photographer Jeff Bark, who’s feted for his high-octane use of colour and a pop-edged, hyper-realistic style. Bark was already aware of designer Atsuko Kudo’s latex work, having shot it for a number of fashion stories. For Bark, the project was about pushing boundaries.

“For me, my photography is only about light and colour, so in this case I wanted to light the car to emphasize its form and three-dimensional qualities, but having the latex as a second skin so you could see the lines of the car in a new way. What’s so appealing about working with Mercedes-Benz is that each campaign is very different; they always try to make something you haven’t seen before. An icon has to be an obsession for more than just the person who is in love with it; one of the things about Mercedes-Benz is that it’s universally loved.” - Jeff Bark, photographer

Alongside the SL, the star of the show in matching peacock-blue skintight latex is Natasha Poly, one of the world’s most recognizable faces.

“I’m very proud and honoured to have become a member of this amazing family at Mercedes-Benz and to do this beautiful campaign, introducing this iconic car. I feel very powerful in this dress, like a superhero. I feel very strong and sexy at the same time.” - Natasha Poly, model 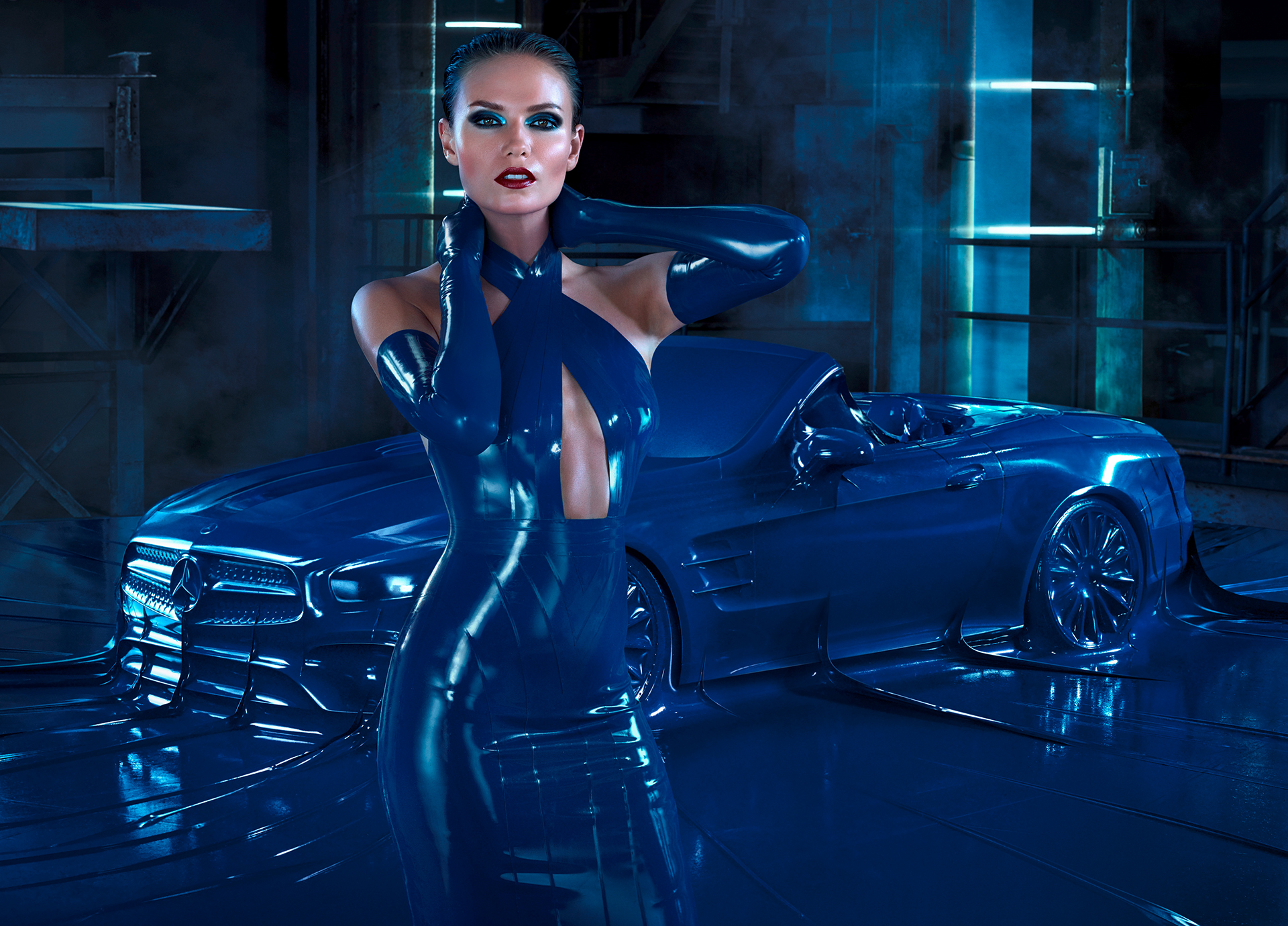 The latex work is by Atsuko Kudo, the Japanese-born, London-based designer who’s world-renowned for her ingenious work with the fabric, and whose hand-made pieces have been worn by the likes of Beyoncé, Kate Moss and Lady Gaga. When Kudo was approached by Mercedes-Benz to take part in the fashion campaign of the new Mercedes-Benz SL she immediately saw a synergy between the car and her designs. “They are so similar- both are sexy, curvaceous and super shiny,” she says. The car was wrapped in 130 square meters of custom-made latex produced from five separate sheets that were meticulously glued and polished by hand. The result is a campaign that seamlessly combines a daring and innovative concept with an accomplished technical feat.

“Like no other model, the SL embodies the myth of Mercedes-Benz. Just think of the legendary 300 SL or the Pagoda– everlasting vehicles. Icons such as the SL are timeless and redefine themselves through innovative design over and over again and they often polarize. These characteristics were successfully carried out for our new fashion campaign with the SL.” - Dr Jens Thiemer, Vice President Marketing Mercedes-Benz Cars 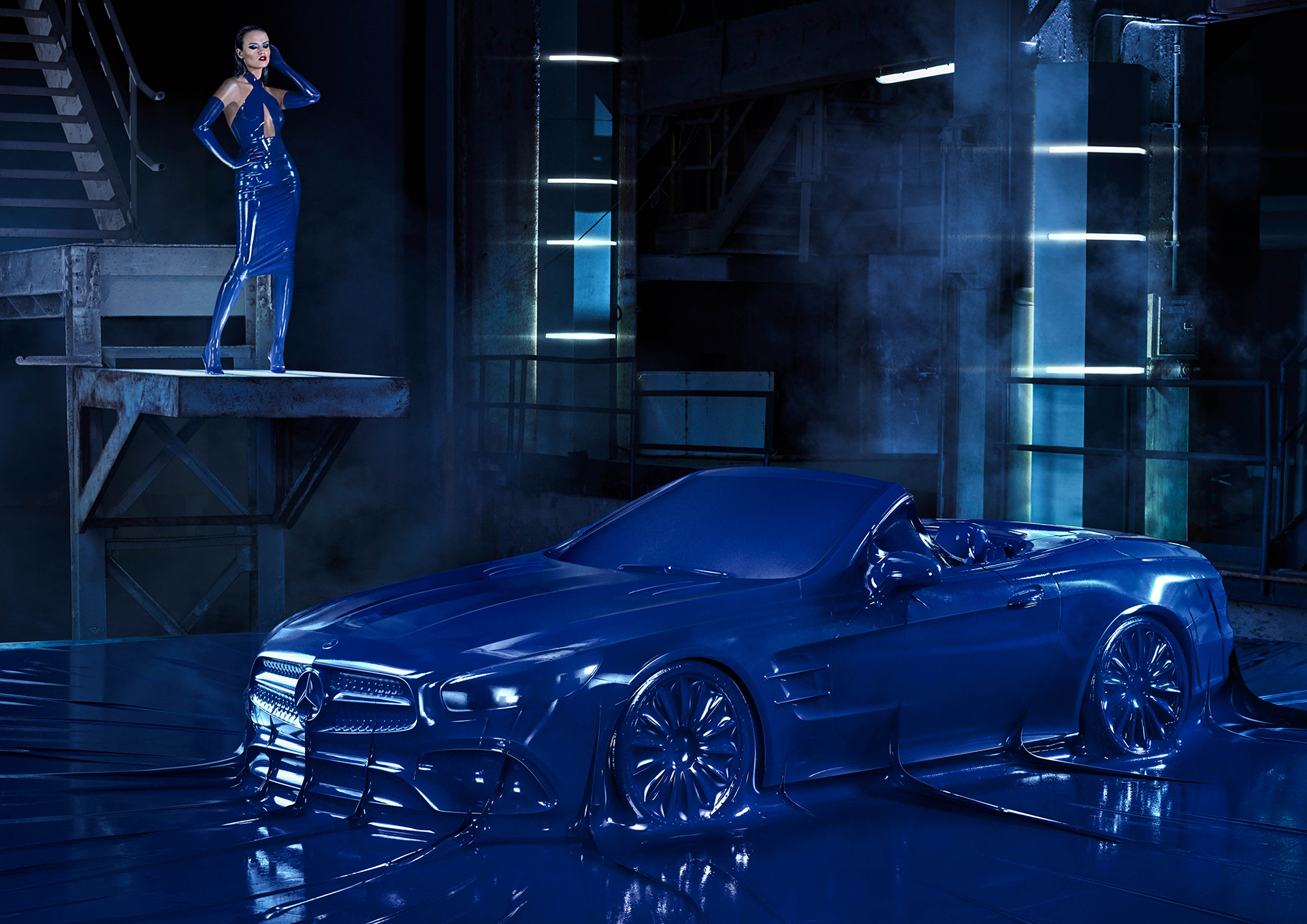 Bark chose to shoot the campaign in a working quarry, selected not only for its monumental proportions but also for the rugged contrast it offered with the SL’s sleek lines. “I wanted somewhere that would enhance the beauty of the car, though in this case that wasn’t very hard to do as the car is already so beautiful! That is why I wanted to put it in an environment that maybe wasn’t so beautiful to make it stand out.”

Both the film and Fashion Campaign were produced as part of the International Fashion Engagement for Mercedes-Benz. For the Autumn/Winter 2016 season and to coincide with the international catwalk collections, the theme is Obsession with an Icon in reference to the iconic Mercedes-Benz SL.

Concept of the Fashion Film

The film begins panning down onto the SL leaving frame; sounds of its engine revving are heard. The noise of the engine wakes Natasha. In a panic she notices that the car is not under the latex cover and flushes with anger. As she enters her surveillance centre she realizes the car is driving through the grounds. She breaks into a jealous rage and makes her way to the car park. She finds the car covered in latex and signs of relief washes over her as she realizes that the car is safe and she is close to the thing she is obsessed with the most.

20 Years of Dedication to Fashion by Mercedes-Benz

Over the past 20 years, Mercedes-Benz has established itself as a partner at selected fashion events. The brand is currently involved in more than 50 fashion platforms globally, including Mercedes-Benz Fashion Weeks in Beijing, Madrid, Amsterdam, Tokyo, Istanbul and Berlin, as well as the acclaimed International Festival of Fashion and Photography in Hyères. The Group recognised the parallels between exclusive cars and high-quality fashion collections at an early stage as, in both worlds, passion, style, innovative design, the finest materials and first-class technical implementation are critical factors for success. Mercedes-Benz has therefore consistently supported selected fashion events around the world over the course of two decades, making a name for itself in particular for promoting talented new designers.

Making of – video – obsession with an Icon

BEHIND THE SCENES: Shooting zur Mode-Kampagne Focus on Fashion Herbst/Winter 2016

Making of – Mercedes-Benz with Atsuko Kudo, the designer

Kudo discovered her love to latex 20 years ago during her time at the fashion school in Japan when she was given the task to design something out of an exceptional material. In 2000 founded the designer, after moving to London, her label « Atsuko Kudo Latex Couture Design ». « Latex gives a woman simply beautiful curves. » Said Atsuka Kudo.

The first « wow » moment for Kudo, after the foundation phase was 2007 took pictures as a cult fashion photographer Steven Meisel actress Eva Mendes in a latex outfit for Italian VOGUE. Then literally started the « Run » on the designs with brand recognition. Another special moment in your career was in 2009 as Lady Gaga, the designer asked a Qutfit for your meeting with the Queen to design.

For the current fashion motif of Mercedes-Benz Kudo designed a tailor-designed dress for supermodel and especially Natasha Poly. The Mercedes-Benz SL 500 has been coated by the designer using a special technique complete with the same latex material. « I was thrilled, because this has nobody done before. It was for me, as if a dream come true. To be able to realize this great and cool project has made me happy. « Said Atsuko Kudo.

In the interview video, the designer gives further insight into their work with latex and what she finds so fasziniernd on this material.

Making of – Mercedes-Benz with Natasha Poly, the model

Natasha Poly, which actually Natalia Sergeyevna Polevshchikova is, the name was too complicated in the debate for the international fashion scene – one of the most successful models today.

Poly, born in Russia, already modeled with 15 years next to the school. When you win a modeling contest in Moscow will start by modeling and running in 2003 their first show for Emanuel Ungaro. Seven years after this show was the poly model with most international VOGUE covers. The Russian VOGUE dedicated her even an entire issue in July of 2008.

Because of their distinctive running style and their « Signature » look with high cheekbones poly is especially happy booked Look for the opening and the « closing » of the runway.

Privately she loves Russian pop music and its iPod. Had it with the modeling career did not work out would Poly with a little luck maybe singer gewor-the – singing is in fact their secret passion. In 2015 they presented their singing talent even in a campaign to prove.

As Natasha Poly your « shooting-partners » the new SL 500 saw live on site for the first time she was thrilled, « It’s beautiful. That you can drive it as a convertible, is an especially great feature. And you told me that the SL is higher when driving off – he lifts himself to. I’ve never seen and find it very fascinating. «

Making of – Mercedes-Benz with Jeff Barks, the photographer

The work of fashion photographer Jeff Barks impress at first glance especially by playing with light or even less light. They act more like paintings from another time than as photographs from the present. The protagonists of Barks photo galleries seem to have emerged as from a dream often. Most of his works created in the studio. For each setting Bark sets prefer lend a hand – until everything is perfectly arranged to the last detail and precisely those « Traumkulisse » arises in the four walls of the studio.

His numerous fashion shoots for prestigious magazines such as Dazed & Confused, Another Magazine Muse or could have come equally from the Renaissance period – monumental, partly dark and sometimes he forces the viewer to see the beauty in the bizarre or « ugly ».

For the new fashion campaign by Mercedes-Benz for Autumn / Winter 2016 Bark set the new Mercedes-Benz SL 500 and top model Natasha Poly in the right light. « In my work is all about light and color. In the current case, I wanted to illuminate the car so that its shape offers you a wonderful Dreidimesionalität, and simultaneously move his lines through the second skin of latex coating in a different light. « What Jeff Bark else has to tell the shoot can be seen here 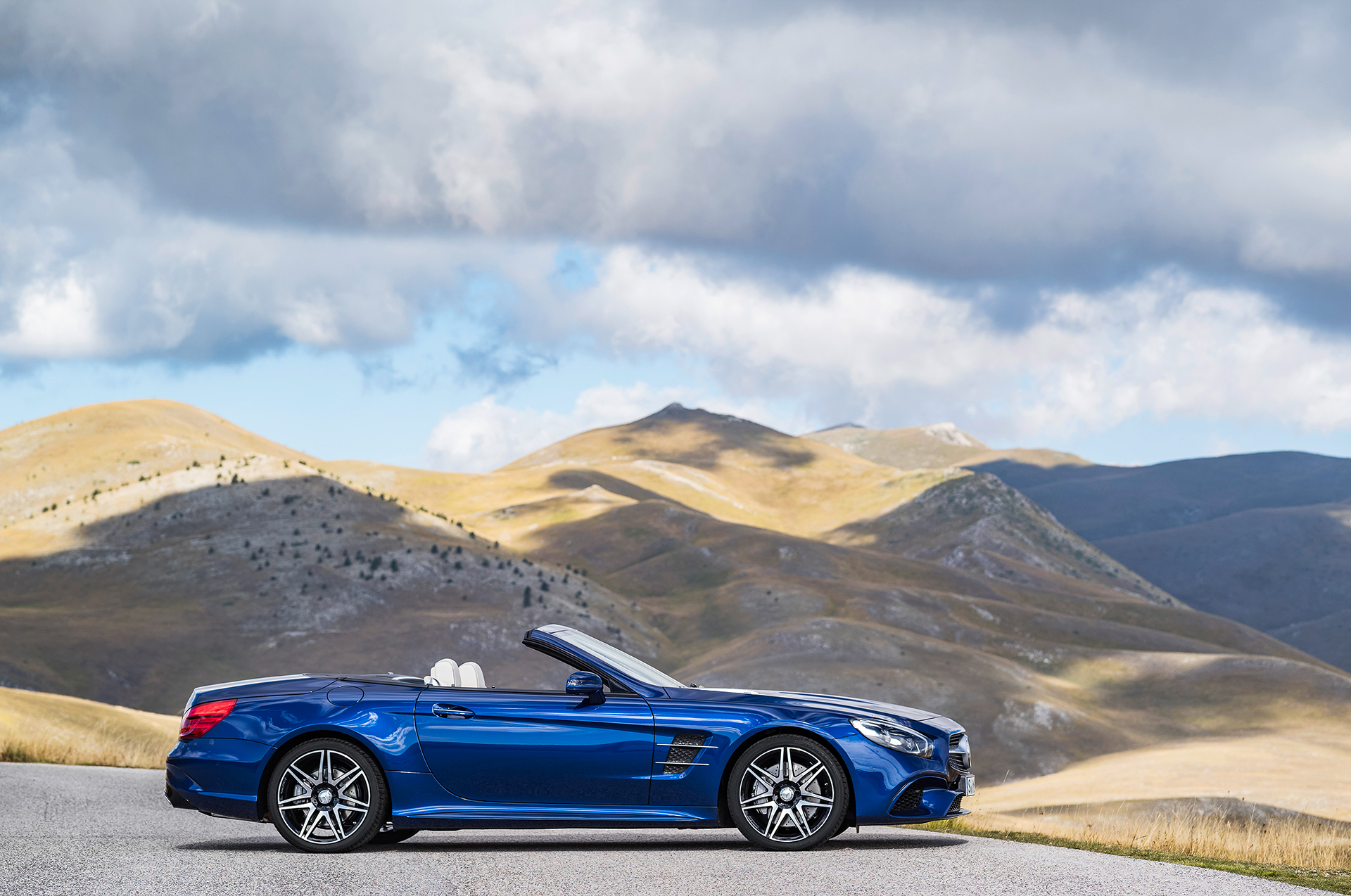